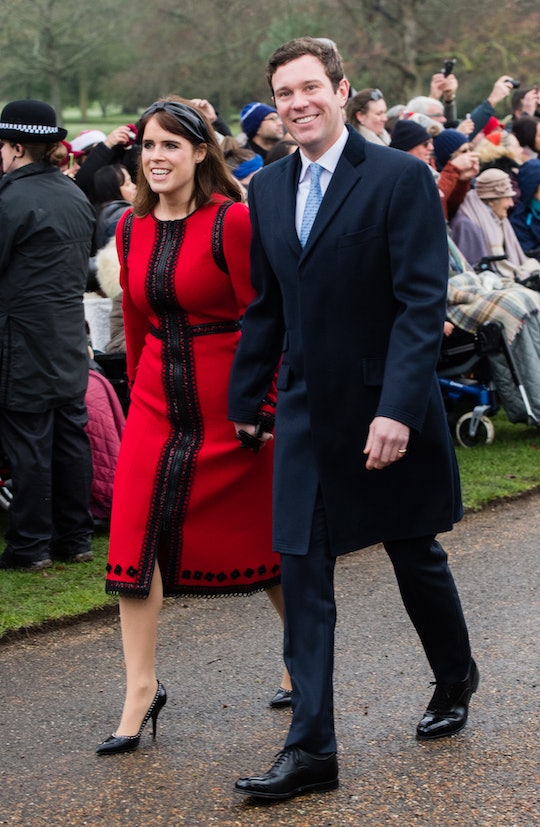 His personalized sweater alone will make you awww.

After a bit of a drought in the royal baby department in 2020, things are really looking up. Not only thanks to Meghan Markle and Prince Harry’s brand new baby Lilibet but also their royal cousins. Back in February, Jack Brooksbank and Princess Eugenie welcomed their first baby and he has become something of a fixture on his proud mom’s social media channels. And with good reason too — he’s already such a little sweetheart.

August Philip Hawke Brooksbank was welcomed into the world on Feb. 9 by his delighted parents. At the time, Buckingham Palace released a statement about August’s birth that said, “The Queen, The Duke of Edinburgh, The Duke of York, Sarah, Duchess of York, and Mr. and Mrs. George Brooksbank have been informed and are delighted with the news.”

Princess Eugenie’s little boy is the 10th great-grandchild of Queen Elizabeth and Prince Philip, as well as being the Duke of Edinburgh’s namesake. Of course, August already has one younger royal cousin, little Lilibet Diana Mountbatten-Windsor, over in California. And another cousin from his aunt Princess Beatrice on the way. But to his parents, August is obviously their number one.

To celebrate World Oceans Day in June, Princess Eugenie took to her Instagram Story to share a short video of August cooing away in a little bouncy chair with a stuffed animal shark. Brave.

The proud mom celebrated World Environment Day in June with a series of outdoor shots including one of herself toting August in a baby carrier through a field of flowers.

In honor of Jack Brooksbank’s birthday on May 3, Princess Eugenie snapped a photo of August sleeping on his dad’s shoulder wearing a sweater embroidered with his name on the back. And his dad looking super proud of his baby boy.

Princess Eugenie celebrated her first birthday as a mom in March, and of course little August was the main event at her celebration on Instagram.

In that same Instagram post for Princess Eugenie’s birthday, fans got a rare peek at August’s little face.

When Princess Eugenie celebrated her first Mother’s Day in March in the United Kingdom, she posted a photo of August among some yellow flowers with the message, “I'm so excited to be August's mum and as you can see I'm enjoying my first Mother’s Day.”

Princess Eugenie and Brooksbank shared their official announcement of their baby boy’s birth on Feb. 20 with photos taken by “our wonderful midwife,” as she wrote on Instagram, “Thank you to the wonderful essential workers including our midwife who came to discharge our boy.”

That same photo shoot gave a good glimpse of the newborn baby’s adorable face. Those round cheeks!

The very first photo of August was a black and white shot of his hand being held by his parents’ hands the day he was born. The perfect introduction to a new little family.