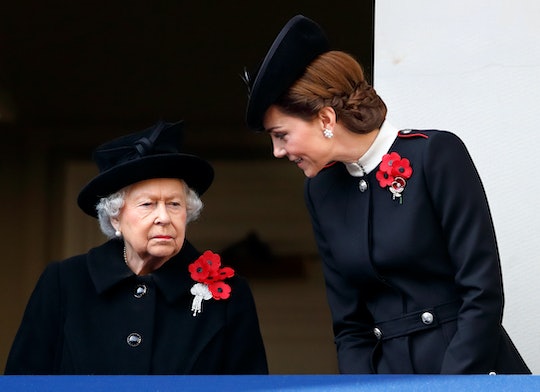 She was confused when she visited Kate Middleton and Prince Williams’ home.

Kate Middleton has brought a sort of everywoman normalcy to the royal family. She’s a hands-on mom to her three kids, which is a stark contrast to traditional royal parenting styles. And she’s also apparently something of a home chef who appreciates a big eat-in kitchen. Which has struck her grandmother-in-law Queen Elizabeth as unusual.

Before Middleton and her husband Prince William moved into their Norfolk county property, Anmer Hall, in 2015, they did a pretty extensive renovation to update the historic building, including the addition of a nice big eat-in kitchen. When Queen Elizabeth first visited the Cambridge family to see their new home, she had something of a strong reaction to the kitchen according to royal biographer Sally Bedell-Smith. “I remember when they had just finished renovating Anmer Hall, and they invited the Queen over for lunch," Smith told People. "They have one of those big kitchens with eating areas, and she said, 'I can't understand why everybody spends their time in the kitchen.'"

Queen Elizabeth, of course, has grown up in grand homes where servants prepare and serve her food, which makes me sort of sad for her when I really think about it. Kate Middleton’s tendency to bake birthday cakes for her kids in her big eat-in kitchen, get messy making pizza with 9-year-old Prince George, 7-year-old Princess Charlotte, and 4-year-old Prince Louis, and invite guests in for tea must seem somewhat foreign to Her Majesty. But these are undoubtedly joyful, regular-person experiences that the Cambridge kids will carry forward with them into their decidedly non-regular royal futures.

Queen Elizabeth herself has benefitted from the Duchess of Cambridge’s homespun comfort in the kitchen in the past. Middleton once gifted Her Majesty some chutney made from a family recipe for Christmas because, as she told the BBC in 2017, Queen Elizabeth “has everything.” She decided to go the homemade route even though she admitted she was “slightly nervous.” She needn’t have worried. On Christmas day Middleton “noticed it was on the table” along with all of the other royal offerings, so clearly the Queen made a special effort to include it.

Perhaps one day, Middleton can invite Queen Elizabeth over for a nice catch up in her kitchen. Give her a cozy chair, make her comfortable, let her eat all of her favorite chocolate goodies, pour her a cocktail. Then her Majesty will truly understand.