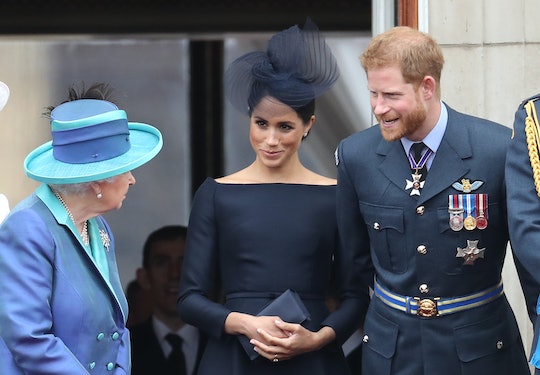 We knew she still loved them.

Queen Elizabeth met with Prime Minister Boris Johnson at Buckingham Palace on Wednesday. This meeting was significant for several reasons; it marked the first time Her Majesty has met with the Head of State in person in 15 months due to COVID-19. A look inside their meeting also revealed the queen keeps a lovely photo of the Duke and Duchess of Sussex tucked among the rest of her family photos. A clear indication that, no matter what critics might think, the pair are still a “much loved part of the family,” just as she said they would be when they stepped away from their senior royal roles in January 2020.

During Queen Elizabeth’s visit with Prime Minister Johnson, reporters were on hand to record the historic reunion. As the pair discussed what Queen Elizabeth called the “most extraordinary” events of the past year, some family photos were visible in the background. The Duke and Duchess of Cambridge had a portrait on full display, for instance, as well as the Earl and Countess of Wessex. But one photo was especially noteworthy; a previously unseen portrait of Prince Harry and Meghan Markle from their engagement in 2017. Her Majesty remains a proud grandmother, apparently.

The photo comes at a time when there has been much debate over the Duke and Duchess of Sussex’s relationship with the rest of the royal family. Particularly after two big events in 2021; their February interview with Oprah Winfrey where they opened up about their struggle within the monarchy and shared claims of racism that drew immediate backlash. And then there was the birth of their daughter Lilibet “Lili” Diana in June, who was given her great-grandmother’s nickname despite a report from the BBC that the name was allegedly not approved.

With every story of potential rifts between Queen Elizabeth and the Sussexes, there is another story of their continued closeness. Like when Prince Harry told James Corden that Queen Elizabeth bought his 2-year-old son Archie a waffle maker for Christmas, or told Winfrey that he has spoken more often to his grandmother since he moved away than he did when he was a senior royal.

And then there is a simple photo, mixed in with the rest of the family, that speaks louder than words. They are still a part of the royal family. They are still much loved.