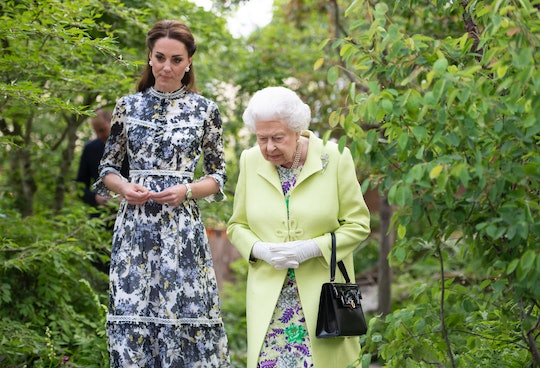 The same night as Meghan Markle and Prince Harry.

Royal fans from both sides of the pond will be tuning in to watch the highly anticipated televised interview between the Duke and Duchess of Sussex and Oprah Winfrey. The day was already set to be exciting, but now royal aficionados are in for a double treat. Just hours before Meghan Markle and Prince Harry's interview airs, Kate Middleton and Queen Elizabeth will appear on television along with other key members of the royal family. But before anyone makes assumptions about dueling interviews, it seems this was just a coincidence. A coincidence that spells a great night of television.

As the head of the Commonwealth, a collection of 54 countries working together on issues of democracy, peace, and development, Queen Elizabeth is scheduled to appear in a televised special for Commonwealth Day, which falls on March 8. Normally representatives for each country in the Commonwealth gather at Westminster Abbey to celebrate the special day, but COVID-19 lockdown efforts in the United Kingdom and elsewhere have changed that.

Instead, A Celebration for Commonwealth Day will air on BBC One on Sunday, March 7, according to a statement shared on the Westminster Abbey website. The program will be presented from Westminster Abbey and will include appearances from Prince Charles, Camilla Parker Bowles, Prince William, Kate Middleton, and Sophie, the Countess of Wessex. Queen Elizabeth herself will also be on hand to share her annual Commonwealth message remotely from Windsor Castle.

The special, which People reports has been in the works since early January, is set to air hours before Markle and Prince Harry's interview with Winfrey on CBS. The couple have signed on for a 90-minute interview with the legendary interviewer, who also happens to be their neighbor in Montecito, California, and it will air at 8 p.m. EST, or 1 a.m. in the United Kingdom.

Prior to their decision to step down from their senior royal roles, Prince Harry and Markle were President and Vice-President of the Queen's Commonwealth Trust. In fact, their very last public appearance as active members of the royal family were at the Commonwealth Day celebrations at Westminster Abbey last March, before COVID-19 quarantine came into effect.

The couple are no longer part of the Queen's Commonwealth Trust, as Buckingham Palace announced on Feb. 19, because they are no longer working members of the royal family at all. Queen Elizabeth shared in a statement that "The honorary military appointments and Royal patronages held by The Duke and Duchess will therefore be returned to Her Majesty, before being redistributed among working members of The Royal Family." Despite the change in royal duties, Queen Elizabeth went on to note, "The Duke and Duchess remain much loved members of the family."

Sunday, March 7 will be an exciting day for fans to catch up with members of the royal family, particularly now that Markle and Prince Harry are expecting their second baby.