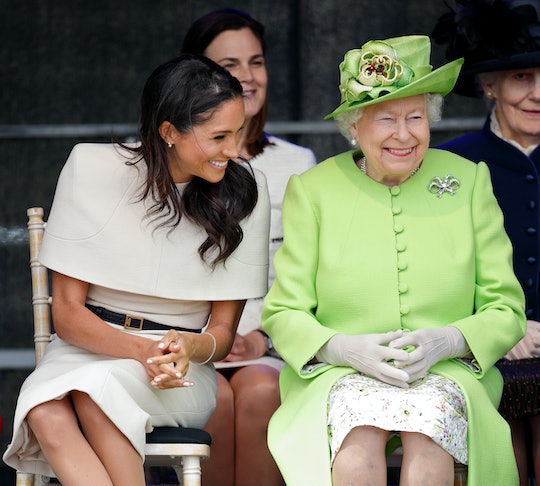 Meghan Markle Once Gave The Queen A Hilarious Christmas Gift

It was a hit with everyone except the corgis.

Buying Christmas presents for your fiancé's family can be a real headache, especially if your fiancé's grandmother owns crowns and castles and such. What on Earth are you supposed to buy for the monarch who has everything? Go funny and silly, apparently. Once upon a time, Meghan Markle gave the queen a Christmas gift that reportedly made her laugh out loud when they spent their first holiday together in 2017, and it was a hit with everyone. Except the corgis.

Markle spent her first Christmas as Prince Harry's fiancée with the royal family in 2017, not long after the couple got engaged. Just take a moment now to think about how intimidating that could have been for the American actress; spending Christmas at Queen Elizabeth's Sandringham Estate in Norfolk County surrounded by all of the senior members of the royal family who have a long list of traditions they follow for the holidays. Including opening up one present each on Christmas Eve together to honor their German heritage.

Giving gifts to members of the royal family who are about to become your family. Tall order. And Markle apparently hit it out of the park with her gift for the queen. According to a report by The Daily Star, Markle bought her future grandmother-in-law a singing hamster. In case you were worried that Markle didn't keep it classy... the singing hamster came with its own rope.

The Daily Star reports that Queen Elizabeth "burst out laughing" when she opened the gift, and reportedly told Markle that the toy could "keep my dogs company," referring to her famous corgis. Who reportedly tore the thing to pieces after the fact, so perhaps they didn't agree.

Markle's husband Prince Harry might have offered some guidance when it came to his grandmother's gift, having once given her a shower cap that read "Ain't Life A B**ch" for the royal family present exchange. He himself once received a Grow-Your-Own-Girlfriend kit from sister-in-law Kate Middleton, so it seems everyone is in on the joke.

This year will look significantly different for the royal family, just like so many others across the world during the coronavirus pandemic. Queen Elizabeth and Prince Philip announced their plans to spend the holidays on their own at Windsor Estate, while Prince Harry and Markle are expected to stay in their new home in California for Christmas with their 1-year-old son Archie.

Hopefully the family will be able to spend time together via Zoom. And mail their gag gifts to each other so long as the corgis don't rip them apart.