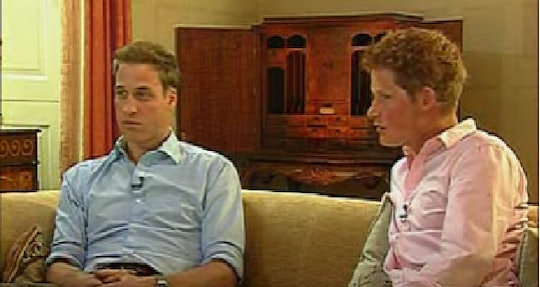 Prince Harry’s memoir Spare has had everyone talking about the royal family over the past few weeks, most especially his relationship with older brother Prince William. The Duke of Sussex spent much of his memoir discussing his relationship with the Prince of Wales, accusing him of physically attacking him during an argument, of being unkind to him and refusing to speak to him when they were young students at Eton, and more. He referred to Prince William as his “beloved brother and my archnemesis,” and a resurfaced interview from 2007 offers a glimpse at what that dynamic looked like for the two of them in real life.

In 2007, the two joined TODAY’s Matt Lauer for an interview on the 10th anniversary of Princess Diana’s death. At the time, Prince William was dating Kate Middleton but not yet engaged to her, while Prince Harry was a military man preparing to be deployed to Iraq. When Lauer asked the two brothers what they would be doing if they were not royals, Prince William responded, “I don't know. It's a really tricky question. I guess. I'd like to fly helicopters, definitely. I'd like to be some sort of heli pilot, you know, working for the UN maybe or something like that. Go off and do some, you know, I'd have to be doing something active — outside and doing sort of fun stuff but with an edge to helping people.” As he spoke, it’s important to note that his younger brother waited patiently for his turn.

Prince Harry then went on to say, “No, honestly, I don't know how well this would get on, but I'd probably live in Africa. I'd, you know, I'd like to spend all my time out there,” adding that he would like to be a safari guide if he weren’t a prince. Prince Harry has long been a massive supporter of important African causes like Sentebale, the charity he co-founded that works to help children and adolescents in Africa seek treatment for the AIDS virus. In fact, when he and his wife Meghan Markle initially discussed moving away from London, he told Jane Goodall that they seriously considered living in Africa. It was also a place he visited often after the death of their mother to try to heal.

Even as Prince Harry attempted to explain his passion, Prince William interjected by saying, “It will be really good for me, you see, as he wouldn’t be around.”

Beyond seeing Prince William’s questionable treatment of his brother, the other telling element is how often Prince Harry talks about wanting to be “normal.” About walking away from his royal life to live a normal life. Talk about foreshadowing.