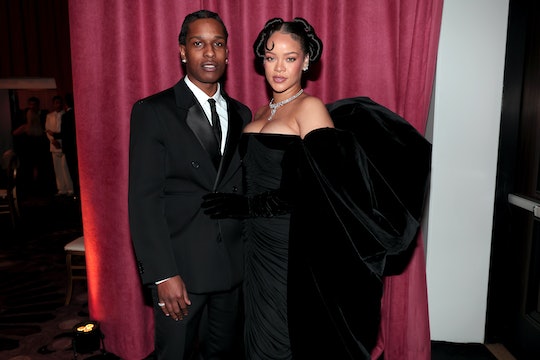 Riri and Rocky are the most fashionable parents on the streets right now.

Ooo-la-la Rihanna and A$AP Rocky! The new parents left their son at home for an all-black date night at the Golden Globes on Tuesday where Riri was nominated for “Best Original Song-Motion Picture” for her song, “Lift Me Up” from the Black Panther: Wakanda Forever soundtrack. Although she lost the award against RRR’s “Naatu Naatu,” the night was a big fashion and beauty win for the couple.

Rihanna’s makeup artist, Priscilla Ono, shared a few shots of the singer on her Instagram Stories using Fenty Beauty. “We wanted to create a clean, refreshed beauty look using all rose gold hues as a soft juxtaposition to the dramatic structure of her gown,” Ono said in a statement about Riri’s look. “We kept the eye minimal and mixed different rose gold tones on her lips, cheeks and body for an all-over sheen.”

The Golden Globes also snapped a video of the couple’s night on the town and posted it on Twitter. “The I C O N I C @rihanna and @asvpxrocky are in the building,” the caption read.

Rihanna and A$AP Rocky welcomed a son, whose name has yet to be revealed, together last May. Fans got their first view of their son on a TikTok video she shared last month. In the video, their son, who was 7 months old at the time, was laughing and smiling in his car seat at his mom as she recorded him.

While glimpses of Rihanna and A$AP Rocky’s little boy are rare, the times the new mom does speak about him, every parent can relate. “Life starts over when you become a parent. It’s life that you’ve never known before,” she told Access Hollywood at the premiere of her “Savage x Fenty Show Vol. 4” lingerie show. “The beginning is like you’re tripping acid every day. It’s wild, trippy as hell. You look at him and he’s yours, but he’s a stranger and you’re learning him as he’s learning you and learning the world. When he looks at me in my eyes, my whole soul … I can’t tell if it’s cold or hot.”

Aside from parenthood, Riri is getting ready for her epic Super Bowl halftime performance. The billionaire mogul recently released a limited Game Day collection to her Savage X Fenty collection. As a new mom, Rihanna may not have a lot of free time but when she does she makes the most out of it to be fashion-forward and monumental.