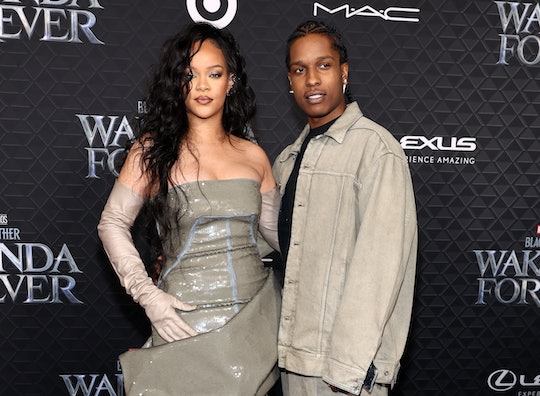 It only took 45 seconds to fall in love with Riri’s baby boy!

Rihanna’s baby boy has finally made his public debut — and oh my goodness, he’s adorable. Over the weekend, the “Lift Me Up” singer and Fenty mogul posted a 45-second TikTok video of her 7-month-old son with A$AP Rocky in his car seat laughing and smiling, giving us all baby fever in the process.

In the TikTok video, you can hear his famous mama giggling at him in the background and at one point, like any typical baby being recorded, he tried to take her phone away. “Hacked,” she captioned the sweet footage, which also marked Rihanna’s own official debut on TikTok.

“That little man doesn’t even realize his mama is RIHANNA,” one TikToker commented under the video.

Paris Hilton also hopped in the comments writing, “So happy for you💕💕💕.”

The “Lift Me Up” singer and “D.M.B.” rapper welcomed their son back in May, five months after announcing her pregnancy in late January with a viral photo shoot taken in New York.

In a recent interview with Entertainment Tonight, the 2023 Super Bowl headliner opened up her favorite parts of motherhood so far, including seeing that sweet smile of his we saw on TikTok. “Oh my god, the mornings, like, seeing his morning face! Seeing a baby with, like, little bags and waking up and they're just, like, startled” she said. “They're trying to figure out where they’re at. It's the cutest, it's my favorite part of the day.”

Since his birth, the couple has been private about sharing images of the infant on social media. But on the same day the little one made his official public debut, Hollywood Unlocked released images of their baby boy, which were exclusively shared with the outlet by Rihanna herself. Hollywood Unlocked CEO Jason Lee explained how he was able to get the exclusive photos and said it all boiled down to the “Umbrella” singer’s support of Black media and not wanting the paparazzi to have that kind of access to her child.

“Since the new photos of ASAP and Rihanna’s baby is out let me tell you how this happened,” Lee explained in a series of tweets on Dec. 17. “Yesterday she FaceTimed me to tell me that paparazzi took unauthorized photos of their baby and planned to release them. So she said if anyone was going to put it out she wanted me to.”

“She wanted BLACK MEDIA to be the one to do it since she wasn’t going to be given the choice. First, I’m honored they would trust me and kinda sad it had to be that way. I wish they were given the choice. Kids are off limits here at HU. I guess some folks don’t care,” Lee continued. “But what’s the most telling is how in the midst of her baby being revealed without her approval she wanted black media to get it out first. I wish more people thought about black media like this.”

The name of Riri’s and A$AP Rocky’s son has yet to be revealed. But as seen in these new pictures and the TikTok video, Rihanna’s parenting content will come all in good time and on her own terms, as it should be! (And, no pressure, but we’re still holding out hope for that maternity line...)