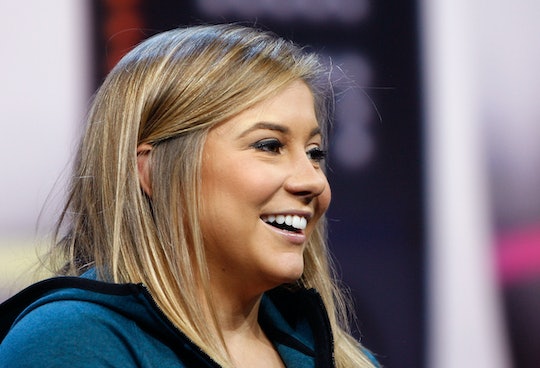 A future Olympian, for sure!

Looks like the apple doesn’t fall (or jump) far from the Olympics tree. Former teen phenom and gymnastics gold medalist, Shawn Johnson, now the proud mama of two, recently took to Instagram to share highlights from her sun-soaked family vacation. In an Instagram Reel that’s racked up over 4 million views since it was posted, Johnson’s 2-year-old daughter, Drew Hazel, gave her parents an impressive poolside surprise, when she stood on the ledge in her sweet little short-sleeved ruffled bathing suit and dove headfirst into the water.

“Don’t know where she learned this from but I’m impressed,” Johnson captioned the video. And if that spontaneous display of athletic prowess wasn’t incredible enough, Johnson’s leaping mini-me finished her landing with a little underwater flip before her dad, Andrew East, scooped her right up into his arms.

Of course, a former gymnast knows how to play to the crowd by picking out the right music to accompany a routine, and Johnson nailed it with her Instagram song selection. “Daughter,” by Ben Rector, played almost perfectly in sync with Drew Hazel’s splash. And the heartstring-pulling lyrics made the moment even sweeter: “I’ve got a daughter now. The most perfect tiny human.”

Johnson was clearly shocked that her toddler was ready to take such a big leap, as she included this all-caps text over the video: “OUR TWO YEAR OLD DAUGHTER RANDOMLY STARTED DOING THIS.”

But it’s no surprise that East was ready in the deep end of the water. East, a former football player, is a very engaged father and supportive husband to boot. When Johnson was pregnant with their son, Jett James, the empathetic husband even wore a 14-pound ball as an act of solidarity and to see what pregnancy feels like.

Johnson has been through a lot to with her plans to expand her family. She opened up about her history with miscarriage, pregnancy complications, as well as her positive Covid diagnosis. Through it all, she’s stayed positive and generous, giving fans and followers updates and relatable tips like this “pregnancy cankles” hack.

With two professional athletes for parents, it’s not exactly a mystery where their daughter got her sporty DNA. But it might be time for the East family to swap out the balance beam for the diving board, as Drew Hazel is already one talented fish.