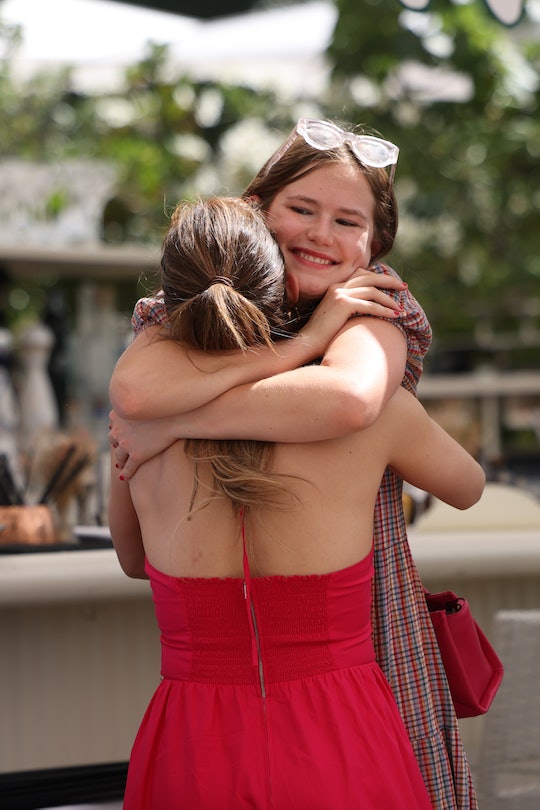 It was a peak blended family moment.

When Ben Affleck’s 16-year-old daughter Violet was not present at his Las Vegas wedding to Jennifer Lopez, rumors swirled. Speculation all over social media that the teenager wasn’t fond of her new stepmother from that one absent moment. Well, a new photo of Violet Affleck hugging Lopez on the streets of Paris will hopefully put those rumors to rest.

Violet’s dad Ben Affleck, who is also father to 13-year-old daughter Seraphina and 10-year-old son Samuel, married Lopez in a secret ceremony in Las Vegas earlier in July. Lopez’s 14-year-old twins Max and Emme, who she shares with ex-husband Marc Anthony, were in attendance at the ceremony, as were Affleck’s two younger children, both of whom acted as wedding photographers. Violet was not, and Page Six reported that she “stayed home because she’s extremely loyal to her mom,” Jennifer Garner. It bears noting that Garner was herself on a holiday in Lake Tahoe the weekend Lopez and Affleck were married, and has been leading her own full life in the four years since they divorced. So it seems fairly unlikely that Violet would feel the need to be “loyal” to her mom because her father remarried.

Especially now that the 16-year-old has joined her dad, stepmom, and siblings on their honeymoon in Paris. And she was photographed wrapping Lopez in a big, warm embrace on the streets of the City of Lights.

Lopez and Affleck took their blended family on a visit to the Louvre Museum in Paris, People reported, and after their visit the whole gang wandered along the Seine to a restaurant. Which was where Violet, looking so much like her mom it’s shocking, stopped to give Lopez a big hug. Which was returned with obvious affection.

Both Affleck and Lopez have made it clear that their blended family is a top priority, as evidenced by sharing their honeymoon with their five kids. Last year, a source close to the couple, who reunited 20 years after their first engagement, said that both parents were keen to make their kids comfortable. “As far as Jen sees it, she and Ben have their whole lives now to set things up in a comfortable way. She intends to be an involved stepmom who’s there for Ben in that area, plus she’ll want him to make the same effort with her and Marc’s kids.”

The effort is being made. And Lopez is getting the big hugs to prove it.