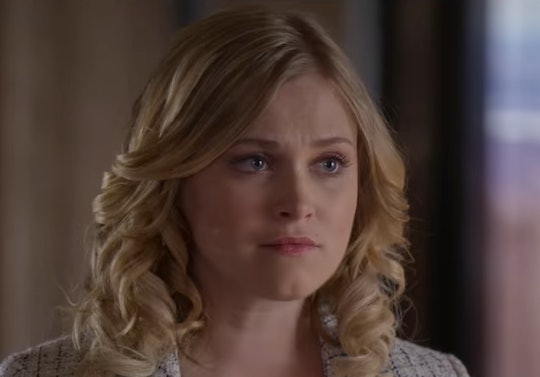 A bed and breakfast decked out in Christmas lights? Yes, please.

The 2017 Netflix film Christmas Inheritance has proven itself to be a lasting holiday classic, akin to A Christmas Prince and all your other festive rom-com favorites. In Christmas Inheritance, Ellen Langord (Eliza Taylor) is a young heiress who goes to the small town of Snow Falls to prove to her father she's ready to take over the family business. The quaint town — that is, of course, filled with snow — is beautifully charming and has left many people wondering: Where is Snow Falls on Christmas Inheritance?

Is Snow Falls A Real Town?

The town of Snow Falls is actually fictional, so it's hard to say where exactly it's supposed to be located. To get there, Ellen takes a bus from Port Authority in New York City, so it’s a safe bet to assume it’s not too far from the city itself. But it’s unclear how long Ellen’s bus trip is or in what direction her bus is traveling, so it’s up to the viewer’s imagination to decide where Snow Falls might be.

What is clear is that the town serves up some serious inspiration for its fictional inhabitants. Though Ellen's story about learning the true spirit of Christmas is nothing new, it’s still very cute and heartfelt. After hiding her true identity so she won't be treated differently, Ellen gets to know the people of Snow Falls and realizes there's more to life than just parties and becoming a big-time CEO.

Additionally, although Ellen starts the movie with a fiancé, she does find love in Snow Falls with Jake Collins (Jake Lacy), who works at the inn and has no idea who Ellen really is or that she's engaged to someone else — until her fiancé, Gray Pittman (Michael Xavier), shows up, that is. Thus, there's also a love triangle to keep fans interested.

Where Was Christmas Inheritance Filmed?

Although the fictional town exists somewhere outside New York City, the real-life setting for the film was actually in Ontario — and surprisingly, it wasn't even filmed during the winter.

According to Heavy, Christmas Inheritance was filmed in North Bay, Ontario from March 24 to April 8 of 2017, with some scenes being filmed at Niagara-on-the-Lake in early March. Specifically, The Grand Victorian bed and breakfast was used for most of the shots at the inn Ellen stays at in the movie. Although the majority of the film was shot in the spring, the setting still had a wintry vibe, and it was actually hit by a snowstorm 10 days prior to when shooting began. Coincidentally, this is similar to the snowstorm that strikes in the movie, causing Ellen to be trapped in Snow Falls longer than she anticipated.

The crew also brought in snow blankets to really give the location a wintry feel, and of course, The Grand Victorian was decorated with Christmas trees and lights to create the perfect holiday atmosphere. From watching the movie, you would never be able to tell it was shot in the spring — but hey, that's just some classic movie magic for you.

Overall, Christmas Inheritance has all the necessary elements of a timeless holiday hit. If you’re really feeling the spirit of the season (regardless of the time of year), make it a double feature with A Christmas Prince that you can watch over and over again.

If you haven’t seen either of these movies yet, now's the perfect time to see what all the hype is about — who says you need to wait until December? Grab some hot chocolate or egg nog, get into your coziest pjs, and watch these holiday classics. Whether they make you genuinely smile or laugh at all the plot holes, there's no doubt you'll love them.

A Christmas Prince and Christmas Inheritance are now streaming on Netflix.

This article was originally published on Dec. 18, 2017