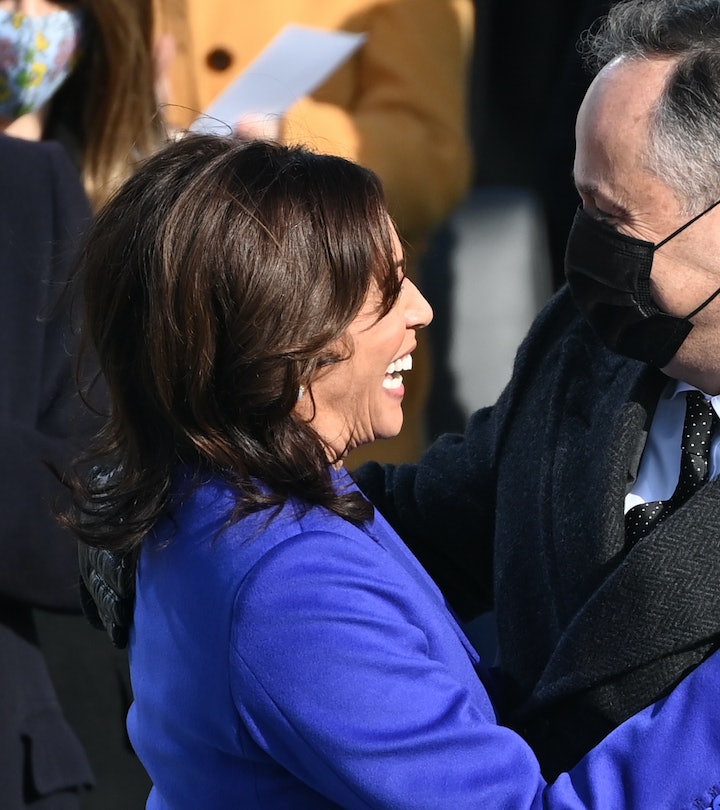 He wants to build on a "legacy of progress."

More Like This
The Obamas’ New Family Rule? Get Vaccinated If You Want To Hang Out With Us
Obama Said The Sweetest Thing About His “Friend” & Family Dog Bo
Wait, Did The Government Actually Do Something For Parents?
Meghan Markle's "Raising The Future" T-Shirt Has A Cute Connection To Archie

On Wednesday, Emhoff's wife became Vice President Kamala Harris, making history as the first woman, first Black person, and first person of Indian descent to take on the role. As her husband, Emhoff made history as well. The father of two has become famous for being enthusiastically supportive of his wife throughout her political campaign, first in her bid to become president and then as vice president alongside President Joe Biden. Emhoff has even announced that he will be taking a leave of absence from DLA Piper, his private law practice, in order to fully commit to his supportive role in the White House.

Now that he has arrived at the White House with Vice President Harris, he has a new official Twitter account as "Second Gentleman," a title that has never been used before. As second gentleman, he used his first tweet to acknowledge the historic weight of his new office. But even more than that, he was sure to "remember generations of women" who have served in his role before him.

Doug Emhoff is not forgetting the generations of women who have come before him.

As Emhoff wrote in his tweet, "I am honored to be the first male spouse of an American President or Vice President. But I'll always remember generations of women have served in this role before me—often without much accolade or acknowledgment. It’s their legacy of progress I will build on as Second Gentleman."

Social media users were quick to praise Emhoff for his enlightened tweet, writing messages like "Thank you so much for being a role model for young men like me throughout the country!" and this beautiful reminder that he is setting the stage for an entire new generation, "I can't wait to see what you do. You're creating a whole new class of people. A lot of future men are going to be looking back to see your example."

Emhoff managed to strike the perfect note between humility in his present role and acknowledging the women who came before him. Women who did not exactly get the same level of effusive press coverage Emhoff gets for standing by their spouse. While many people praise Emhoff for his supportive role, the reality is that women have been expected to do exactly the same for their husbands for centuries without much of a choice in the matter.

Doug Emhoff's decision to take on a supporting role to his wife should be celebrated in equal measures alongside Dr. Biden's decision to keep working. That's feminism, folks.