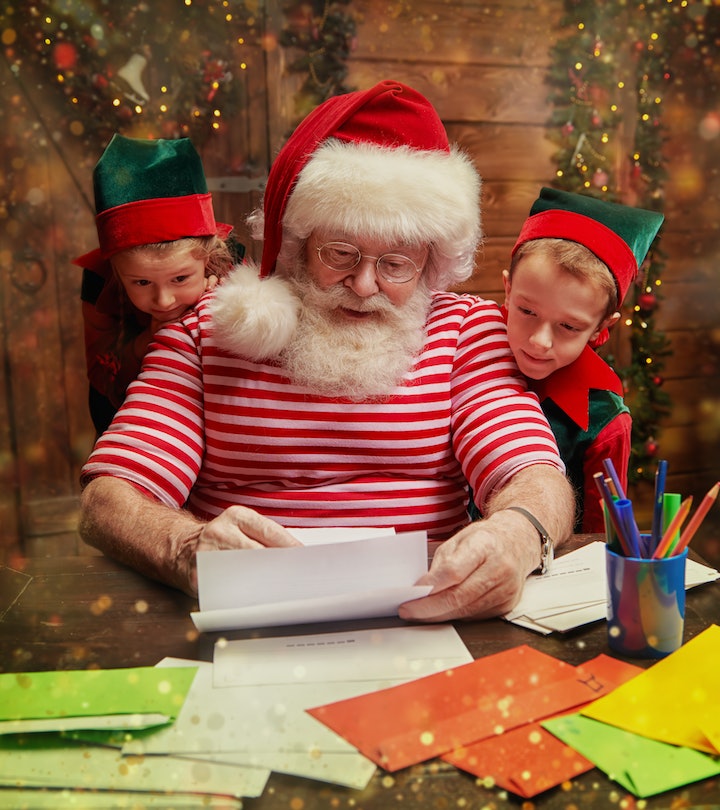 How Many Elves Does Santa Have?

Those toys aren’t going to make themselves.

No doubt about it, Santa Claus is the brand ambassador for the Christmas season. But even though there are so many songs about the holly jolly fellow, the holiday season isn’t a one-man job. In fact, there are countless people (elves, to be exact) who are toiling behind the scenes to help pull off the big night. But exactly how many elves does Santa have?

Although it’s common knowledge that Santa’s sleigh is pulled by only eight reindeer (i.e. Dasher, Dancer, Prancer, Vixen, Comet, Cupid, Donner, and Blitzen), it’s unclear how many elves are busy working in Santa’s workshop to make trains, dolls, and other toys for all the good little girls and boys of the world.

As it turns out, Santa Claus has a small but steady crew of elves who help him each year. The original six elves include Alabaster Snowball, Bushy Evergreen, Pepper Minstix, Shinny Upatree, Sugarplum Mary, and Wunorse Openslae (sound it out, “one horse open sleigh,” get it?), per Elfcrazy.com. But is it just those six who are making all the toys? Let’s count ‘em to find out.

If you look to movies as a guide to counting how big Mr. C’s crew is, you’re going to have an elf of a time. Because in the beloved movie Elf, there are only a handful of workers cranking out all those Etch- A-Sketches (while poor Buddy only managed to make a meager 85). But then if you’re all aboard on The Polar Express, well, there are thousands of elves singing and dancing — and one that looks suspiciously like Steven Tyler from Aerosmith. And there’s only a handful of elves in the classic Rudolph the Red-Nosed Reindeer, sans Hermey, who is more interested in teeth than toys and wants to be a dentist, anyway.

Since Christmas movies aren’t always an accurate indicator as to how many elves are toiling away in the toy shop, estimating Santa Claus’ amount of employees really becomes a numbers game. There are an estimated 2.2 billion children in the world right now. Assuming that some might make it on the naughty list, (and others might not celebrate Christmas), elves would have to produce upwards of a billion toys so that each child can have a present waiting for them under the Christmas tree. If you have elves working 364 days a year (they take Christmas Day off, natch), it would mean that there would have to be hundreds of thousands of elves working around the clock to crank out all those toys. And since Santa’s workshop is often depicted as a small, cozy workplace with no remote work options, it seems that logically, it would take a massive workforce to pull off Christmas each year.

Approximately how many elves does Santa have in 2022?

It seems that there might be an unofficial answer to this age-old question. It was estimated that in 2020, there were about 110,000 elves, per Santa Tracker. Factor in some pandemic baby elves being born in 2021, and then it makes sense that by Christmas 2021, there were 200,000 elves helping Santa Claus make toys. Another year later, and that number could conservatively be closer to a quarter of a million eager worker elves helping to create Christmas magic.

And there you have it. Like some of the many mysteries surrounding Santa Claus (like how he can travel to children’s homes and leave presents, how reindeer can fly, and how he can squeeze himself up and down so many chimneys in one night), the exact number of elves that Santa employs is just another one of those beautifully illogical things that make Christmas scientifically unsound, yet so utterly magical at the same time.

This article was originally published on Dec. 1, 2021