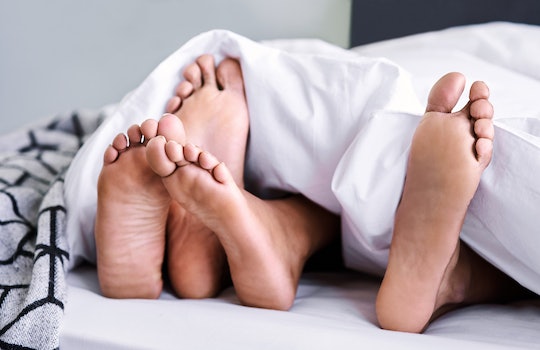 It doesn’t have to make things any less enjoyable.

Learning to work with, understand, and stand up for your body, in all its unique glory, goes a long way toward creating a happy sex life. And as people who have uteruses have gained more understanding and power over how their bodies interact with sex and sexual activity, they’ve also gained more pleasure because of it. When it comes to having a tilted uterus, sexually active people may wonder if it will affect them in any way. And as with any body specificities, knowing how a tilted uterus affects sex can help make intimacy more pleasurable, even if in the end it’s just peace of mind and a better understanding of what’s really going on with your body’s anatomy. After all, a uterus that sits a bit off-axis does not have to hamper anyone’s enjoyment of sex — or any part of life, for that matter.

What is a tilted uterus?

In most cases, the uterus stands up in a vertical position within the body. That being said, there are plenty of variations in how uteruses can naturally be positioned, which are typically categorized into one of three placements. “The uterus is in the pelvis in one of three general positions: tilted forward — known as an anterior uterus; going straight back, with no bend or tilt — known as a midline uterus; or tilted backwards — known as a retroverted, or posterior uterus,” Dr. Felice Gersh, M.D., board-certified in both OB-GYN and integrative medicine, tells Romper. “All three are normal variations of uterine configuration and positioning.”

What is referred to as a tipped or tilted uterus typically means a retroverted or posterior uterus — aka when it leans back a bit toward the pelvis, according to Gersh. The uterus sometimes tilts during its growth and development, or it may become tilted during childbirth, but overall, this does not present a huge problem. “The uterus being tilted backwards is a very commonplace finding,” Gersh tells Romper. “Approximately a fourth of the time the uterus is retroverted — tilted backwards.”

A gynecological exam is typically necessary to identify the positioning of a uterus, but you can also figure it out on your own — you just need a speculum. “The way that your OB-GYN or whoever is examining your cervix knows that your uterus is tilted is because the uterus and the cervix are connected, like the same part of the same structure,” Vienna Farlow, a holistic reproductive health practitioner, tells Romper. “So you easily see the cervix through a speculum exam, and depending on where the opening of the cervix is positioned, that will tell you where the uterus is because they're connected.”

That being said, there are some rare cases where a tilted uterus is associated with something more extreme, likely when it’s confounded with something else. “The only thing is if something abnormal occurs within the pelvis, such as the creation of scar tissue that pulls the uterus into an unnatural position for that individual,” Gersh explains. “[Instances] such as the pulling backwards of the uterus in the presence of endometriosis or an infection [could make] a retroverted uterus an abnormality.”

How a tilted uterus affects sex

Knowing how a tilted uterus can potentially affect the mechanics of sex is good information for any sexually active person. For the most part, it won’t make any difference. “Unless the uterus is being pulled backwards by scar tissue, indicating the presence of pelvic disease, a backward tilted uterus is of no consequence,” Gersh says. “Rarely, a naturally posterior uterus creates some discomfort with intercourse.”

In those more extreme and less likely cases, discomfort could be caused by penetration. “Rarely, a naturally posterior uterus will be ‘bumped’ during intercourse, making the sexual act uncomfortable for the female whose vaginal canal was penetrated,” Gersh says. “If the uterus is tilted backwards due to scar tissue and pathology, intercourse can create pain due to the underlying condition responsible for the pulling backwards of the uterus.”

In addition, according to the International Society for Sexual Medicine, a tilted uterus sometimes makes rear entry positions uncomfortable for the receiving partner, as well as anything involving deep penetration that hits the cervix. Extreme pain, however, could point to more severe conditions such as pelvic inflammatory disease, endometriosis, or an infection, but a visit to an OB-GYN or pelvic floor therapist will likely be able to clear it up with certainty.

How to make sex with a tilted uterus more comfortable

On a positive note, there are many different strategies to make penetrative sex with a tilted uterus more comfortable if you don’t have any other underlying issues, but you do feel some discomfort during sexual activity. For starters, switching positions is one potential easy fix, according to Farlow. If you or your partner find that deep penetration or rear entry doesn’t feel the best, opting for forward-facing positions such as missionary or standard cowgirl are potentially more pleasant options.

In other cases, a surgical procedure called a uterine suspension can move the uterus into a more forward-facing position. However, this is an option for more serious cases where activities other than sex are affected, too.

It should also be noted that any pain during sex, no matter the position of your uterus, shouldn’t go unaddressed. “If you're having pain during sex, regardless of what you think it is — perhaps deeper penetration feels like they're hitting your cervix — something is going on in there,” Farlow says. She suggests seeing a pelvic floor therapist who will be able to help you identify the cause of any pain you’re having, as well as suggest solutions.

In general, though, most people with tilted uteruses won’t have any difficulty with sex — or other things, for that matter. But if you do have any questions about the positioning of your uterus, as well as any discomfort you’re experiencing during sex for whatever reason, a health provider will be able to provide you with answers.

This article was originally published on June 7, 2017