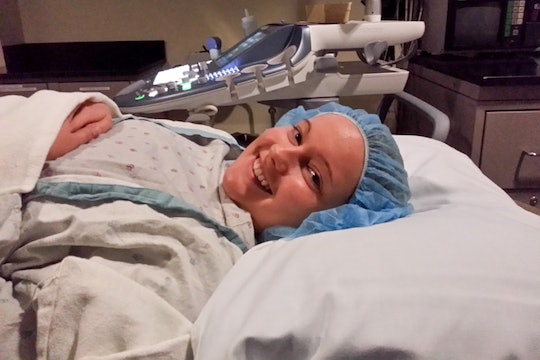 Heads Up: Infertility Turns Your Body Into An Experiment

My husband and I wanted three children after we got married. Well, two for sure, and I was hoping I could slide in that third baby when he wasn’t looking. We started trying about a year after we got married, and fully expected to be pregnant in a few months. The reality was that we would actually go through six years of infertility treatments before I finally gave birth to our daughter. It’s no secret that infertility is stressful on couples, and costly to undergo, but there is little acknowledgement of how helpless you feel through it. Infertility is essentially a damn science experiment, complete with a team of medical professionals who are trying to figure out what’s wrong with you and how they can fix you.

My initial visit to the doctor was overwhelming. I sat in an OB-GYN's office, fidgeting on the chair as he asked me all sorts of questions about how often my husband and I were having sex (probably not enough) and how regular my periods were (I bleed like clockwork, thank you very much). I was prodded to figure out if I had a thyroid issue and poked several times to see if my hormones were out of whack. Later, I was sent home with a strip of white pills that would force my body to ovulate (hopefully) and instructions on how to use an ovulation stick.

After going Regina George on my husband one too many times from the awful emotional side effects of the Clomid I was taking, and peeing on all sorts of ovulation and pregnancy and who knows what other tests, we were left with nothing to show for it, except a slightly rocky marriage.

Then we started at the fertility clinic doing intrauterine inseminations, or IUIs. We took one drug because it was supposed to be better than Clomid at helping me ovulate, but that wasn’t helping, so they decided a shot in my ass was probably much more effective. When that didn’t work, we decided to give up on trying to inseminate me, and instead move on to in vitro fertilization, IVF.

Our first cycle started out alright until we were left with one embryo that grew enough that the doctors decided to transfer it anyway. That little embryo stuck around for a few weeks until I miscarried.

“Just a fluke,” they told us, “It could have happened to anyone."

Still, grieving the one and only baby I had for the briefest of moments, we paid a whole ton more money for the chance of the next two cycles being successful.

No one really knew why this was so hard to get me pregnant. No one could really tell me how to make my body behave.

The next round of IVF saw the doctors try out some new things to my body, in hopes of getting it to produce more eggs. We tried a new medication to beef up my follicles — but not too much! We didn’t want for me to start ovulating them early and ruin the whole cycle. We decided to try not one, but two shots in the butt to see if that would prepare my body better. Finally, after the doctors went in and retrieved my eggs, they were injected with my husband’s sperm (the eggs, not the doctors) so that the egg wouldn’t have to do any work.

That cycle was a bust.

Our third IVF had our doctor scratching his head, wondering how to best Mother Nature to successfully impregnate me. “We’re going to try this antigon protocol on you, and hope we can get some better quality eggs,” he explained.

Translation: We don’t know what else to f*cking do with you.

It’s playing Russian Roulette and you’re spending tens of thousands of dollars — most of the time out of your own bank account — to figure out what’s going on each time you pull the trigger.

My body decided it didn’t in fact like this protocol and rebelled by sky-rocketing my blood-pressure, landing me in the E.R. and pulling me out of work for the next few weeks, effectively canceling the cycle.

I wasn’t feeling encouraged by the time we started up again in the new year. I wasn’t feeling hopeful that this time would be it. In fact, I was pretty beat down. No one really knew why this was so hard to get me pregnant. No one could really tell me how to make my body behave.

Infertility is certainly not an exact science. And with the complexity of our human bodies, of course, it will never be. But not only do we endure test after treatment after failed cycle, but we become one giant experiment. It’s playing Russian Roulette and you’re spending tens of thousands of dollars — most of the time out of your own bank account — to figure out what’s going on each time you pull the trigger so you can bypass it, or treat it, or pull it out, and hopefully wind up with one of those babies that everyone around you seems to have without really even trying.

When we finally got pregnant, we figured out I needed to be on two shots a day, a medication patch and three prescription medications to keep my baby growing and developing. We figured out we needed donor eggs since mine were apparently useless — which of course would have been nice to know six fertility treatments ago, prior to spending the equivalent of a brand new Mercedes-Benz.

I guess the silver lining here is that I know so much more about my body now. My husband can rattle off my follicle counts and luteal phase like a freaking boss, and we don’t need money because we have a beautiful little miracle. An expensive miracle, but nothing ventured, nothing gained, right?