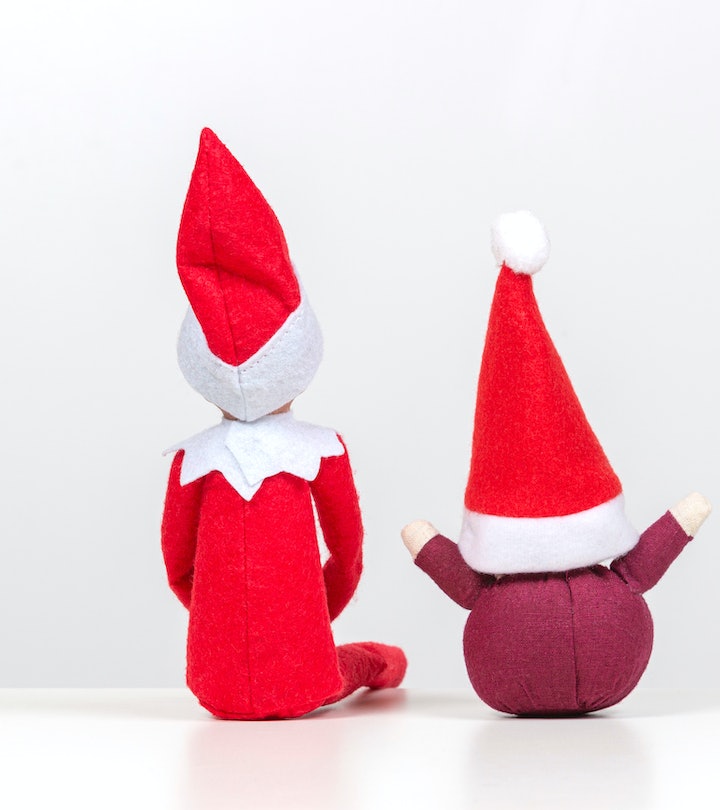 Is Elf on the Shelf Real? All About The Beloved Christmas Tradition

Yes, as real as Santa Claus himself.

by Jennifer Parris
November 15, 2022
We may receive a portion of sales if you purchase a product through a link in this article.

It’s easy to get swept up in the magic of the holidays. Department store Santas, even the ones with the obviously fake beards, suddenly transform into the real deal when your child is sitting on their lap posing for a picture. You have an inexplicable urge to drink egg nog, and you find yourself crooning like Bing Crosby and dreaming of a white Christmas. So it’s understandable that if you believe in flying reindeer, you might also believe in the enchanting story of the Elf on the Shelf. But if your child asks you, “Is Elf on the Shelf real?” here’s what you can say.

How did Elf on the Shelf start?

The Elf on the Shelf began back in 2005 when Carol Aebersold and her daughter, Chanda, penned a book together called The Elf on the Shelf: A Christmas Tradition. As the story goes, Santa Claus would send an elf from the North Pole to watch how well a child was behaving in the days and weeks before Christmas. Santa needed some help making his naughty and nice lists, after all. The elf would then return to the North Pole and report to Santa if the kid was good or not, and then return to the child’s home before they woke up in the morning. The cool part is that each morning, the Elf on the Shelf would be a different spot, but the child wasn’t allowed to touch the elf for fear of losing their magic.

The Elf on the Shelf
Target

Today, when parents adopt an Elf on the Shelf, they get to give their elf a new name. The fun (for kids, anyway) really begins when their elf returns to their home each morning, because it can often be found in some funny situations, like sipping maple syrup straight out of the bottle, making snow angels out of sprinkles, or playing with Barbie in her dream house.

Is Elf on the Shelf real?

Oh, I didn’t always think this way. I begrudgingly bought the doll when my youngest daughter, Claire, came home from preschool excitedly talking about Elf on the Shelf and asked why she didn’t have one. So Mama made a Target run and…Poof! Magically, Claire and her little brother Andrew now had their very own Elf on the Shelf.

I still wasn’t sold on the idea of the Elf on the Shelf. It wasn’t as if I needed one more thing to do during the holidays, because now I had to move a dumb doll for the next 20-ish days, too. And not just move it from one location to the other, but come up with intricate, exciting, and witty positions that could not be a duplicate of a previous day. Who has time for that?

Then, it happened. I remember the exact moment that our Elf on the Shelf became alive. The littles and I sat together on my bed and read The Elf on the Shelf: A Christmas Tradition, and we got to the page where it said we had to give our elf a name:

“The first time I come to the place you call home

You quickly must give me a name of my own.”

That was it. Immediately, the littles wanted to call her Chloe. After they went to bed that night, I held the doll and looked at her. Chloe. She was no longer the silly, somewhat smirky, gangly-armed and legged doll. She had an identity, and a purpose. And I was determined to help her achieve it.

Over time, I began to look forward to what new adventures Chloe would get herself into. I would go online and look for easy Elf on the Shelf ideas, or think about what I could dress her up in. Perhaps she was found pooping out a Hershey’s Kiss or luxuriating in a bath of mini marshmallows. She tried to fish out of my son’s fish tank, and she chatted it up with the Mensch on the Bench, too. One morning, the kids couldn’t find her in the fridge after I gave them guesses, and after they went to school, I actually apologized to her for keeping her in there for so long.

And yes, I did question my sanity.

Sure, it does get grueling having to come up with new ideas and activities on the daily. After all, it’s not enough to just plunk the doll on the couch and call it a day. And there is always that one morning, no matter how much prep and planning you do, that a kid gets up earlier than expected and you forget to move the damn doll from the night before, and you’re stuck scrambling, stuffing her into a tissue box so that you can pretend that she’s still sleeping — just like you were.

But what I’ve found is that Chloe creates conversation and connection. On the way to school, the kids will ask what I think Chloe eats at the North Pole each night, or what her other elf friends do for fun. She’s less of a spy making sure that they’re being nice (and not naughty) and more like a lovely long-distance relative who’s here for the holidays. She becomes a beloved member of the family, if but for a few short weeks.

By the time Christmas comes, and that other person in a red suit takes precedence, I feel sorry for Chloe. Her days are numbered, and we both know it. I’m not embarrassed to admit that once, when I tucked her back into her box before she started her journey, (not to the North Pole, but to my attic), I found myself wiping away a tear, knowing that the magic had ended for another year.

So is Elf on the Shelf real? I guess that depends on who you ask. To my kids, she’s as real as Santa Claus — and we know he’s real. For me, our Elf on the Shelf becomes something so much more than a doll. She’s an emotion, an innocence, a moment in time that you know not so deep down you’ll never get back, so you need to enjoy it now. Yes, the Elf on the Shelf is festive, but it’s ultimately about having fun and being together as a family. And those things are very, very real.

More Like This
Rules, Printables & Tips For Making Elf On The Shelf Magic
These Holiday Squishmallows Are So Elfin Adorable
Experts Don’t Want You To Leave Your Fake Tree Plugged In
35 Pumpkin Pie Instagram Captions That Are Absolutely Delicious