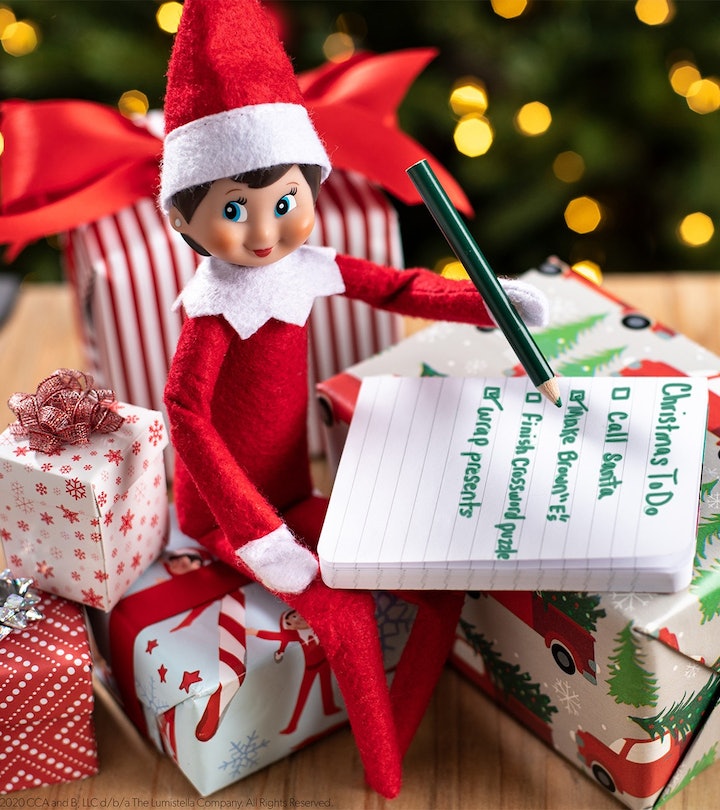 This Christmas tradition takes a minute to explain.

by Emily Westbrooks and Meguire Hennes
Updated: November 16, 2022
Originally Published: Dec. 9, 2017
We may receive a portion of sales if you purchase a product through a link in this article.

When Elf on the Shelf hit homes several years ago, it wasn't immediately clear if it would be the sort of tradition families would keep around for the long haul. But it's obvious now that Elf on the Shelf is absolutely still going strong, both in homes around the world and on social media. You can't visit Facebook or Instagram in the month of December without seeing an elf getting into some dustup that inevitably ends with mini-marshmallows. But if you're new to this magical world, you might be wondering how to introduce Elf on the Shelf to kids for the first time. There's the whole "don't terrify them" bit with the idea of an elf moving around at night, but you also want to make sure you tie up any loose ends with the magic so your kids don't have any questions.

What is Elf on the Shelf?

Elf on the Shelf is a Christmas tradition that has kept holiday magic alive in countless homes across the world. One of Santa’s helpers is sent down from the North Pole at the beginning of December to keep watch over the family and encourage the kids to behave. Throughout the course of 24 days, the elf moves around the house, continuously keeping watch on how the children involve themselves in the family atmosphere. On each day, the Elf on the Shelf will set itself up in a scene or unique part of the house to truly immerse the children in the Christmas magic.

Everyday is a surprise for an Elf on the Shelf house, however, everyone must remember to not touch the elf. If one of your family members touches the elf, their magic will be drained, forcing them to retreat back to the North Pole while they await reassignment. Elf On The Shelf brings families together around the holidays through searching for the elf each day, naming him, interacting with him, and learning about Santa and the excitement that Christmas Day brings. Elf on the Shelf is meat to show the importance of love, patience, resilience, and the Christmas spirit, and all you have to do to keep the magic alive and well is make sure that tiny elf is moving each and every day.

How did Elf on the Shelf get started?

Elf on the Shelf Doll and Book
Amazon

Elf on the Shelf all began in 2005 when Carol Aebersold and her daughter Chanda Bell wrote the children's picture book The Elf on the Shelf: A Christmas Tradition. The story is all about an elf who was sent from the North Pole by Santa to observe how well a little kid was behaving in the days leading up to Christmas. Every night, the elf would return to Santa to tell him how the children were doing, and then he would zip back to the family to find a new spot in their house where the kids wouldn't be too quick to find him right away.

Families are now encouraged to adopt an Elf on the Shelf for their own family and give it a new name. You can even get an adoption certificate from their website. But you might be a little stumped as to how to introduce your kids to their new friend. Thankfully, the rise of the elf has also given rise to a plethora of ideas for introducing your kids to their Scout Elf for the month of December.

When does Elf On The Shelf arrive?

The week between November 24 and December 1 is a time called “Scout Elf Return Week,” where all the elves around the world travel from the North Pole back to their families to begin the fun on December 1. Your elf can arrive on any of these days — between early in the morning on November 24 or late at night on December 1 — they are truly unpredictable. Getting into the Christmas spirit begins on December 1 for an elf, regardless of when they landed back with their families. Having 24 specific days of Elf on the Shelf surprises also isn’t required. If your elf arrives two weeks late, don’t worry, just tell your kiddos Santa needed extra help checking the list twice before he prepares to deliver Christmas joy to millions of children around the world.

How do you introduce Elf on the Shelf to your kids?

1. Print out a welcome letter

An Elf on the Shelf welcome letter is one way to introduce your kids to their new buddy who will be sticking around for the holidays. It can explain to them that the elf has been sent from the North Pole to watch their behavior for Santa, and that the Elf will report back to Santa every night.

2. Read them the book, The Elf on the Shelf: A Christmas Tradition

Another way to introduce the Elf on the Shelf to your kids is to read the book to them. This way you can familiarize yourselves on the story together and the kids can understand why the elf will be hanging around the month and what he'll be up to.

3. Just plop them in your house to announce their arrival

Honestly, beyond that, it's really as simple as popping the elf somewhere in your home. There’s tons of Elf on the Shelf arrival ideas that range from trashing your kitchen to simply setting your family’s Elf on the Shelf on the mantel with a candy cane — either way, your kids will be surprised and excited as long as they know the story of the elf (that they can't be touched or they'll lose their magic, and that the whole point is for the elf to return to Santa each night and report their findings). Contrary to what you may feel peer pressured to do, it really doesn’t take much to impress your kids.

But whatever you do to introduce the Elf on the Shelf to your kids, just know that you're in it for the long haul between now and Christmas. So long as your kids are old enough, they're bound to notice if the elf doesn't move a few nights in a row, so try to do your homework and prepare yourself with some easy Elf on the Shelf ideas in advance.

This article was originally published on Dec. 9, 2017