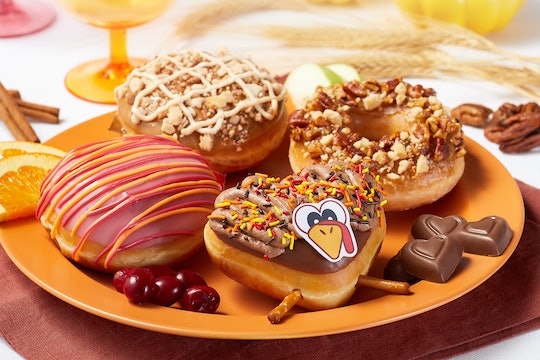 Krispy Kreme is skipping the turkey dinner and going straight to dessert with the chain’s new Thanksgiving-themed doughnuts for 2021. Dubbed the “Gobbles of Gratitude” and available in stores now, Krispy Kreme has debuted four new doughnuts inspired by a few, seasonal fall favorites such as pecans, cranberry, and apple, including one doughnut that looks just like a turkey!

Among 2021’s new slate of sweet treats from Krispy Kreme is the Pecan Pie Doughnut, which is an original glazed dipped in butter tart filling topped with candied pecans and pie crust crumbles. If you load up on cranberry on Thanksgiving, be sure to try to the Cranberry Orange Doughnut. This doughnut has cranberry filling and is dipped in cranberry-orange icing with an icing drizzle. While it doesn’t quite replace grandma’s apple pie, Krispy Kreme’s Dutch Apple Pie Doughnut come pretty close. This doughnut has an apple pie filling, dipped in caramel icing and topped with cinnamon streusel cookie crumbles. And finally, the Gobbler Doughnut is heart-shaped, drowned in chocolate icing and cream, and has a fondant turkey face and pretzel legs. Adorable.

Beyond these new Thanksgiving doughnuts, Krispy Krispy has also released a limited-edition “Gobbles of Gratitude” box, which comes with all four seasonal doughnut and, if you’d like to gift it to a loved one, includes a space for custom notes. The customizable boxes are available now through Nov. 25.

“We missed out on so much last year, including Thanksgiving celebrations,” Dave Skena, chief marketing officer for Krispy Kreme, said in a press release. “This Thanksgiving, people have a desire and need to be together more often and more so than any other Thanksgiving. So, we're creating a way to share your gratitude with others in the most delicious way possible.”

Krispy Kreme has been doing its due diligence to keep the giving spirit going throughout the year. Back in March, Krispy Kreme gave out free doughnuts to vaccinated customers and teachers were given freebies for Educator Appreciation Week. The chain also celebrated first responders for National First Responders Day.

So while you’re chowing down on your Gobbler or Apple Pie doughnut this year, catch a Thanksgiving flick or two. Netflix has a few great titles and let’s not forget A Charlie Brown Thanksgiving!

More Like This
25 Cookie Recipes Without Eggs That Are *Still* Delicious
Does The FDA's Plan To Limit Lead In Baby Food Go Far Enough?
The Best Valentine’s Day TV Episodes For Kids
Alex Guaranschelli Is A Renowned Chef, But Her Daughter Still Gets Recipe Inspo From TikTok
What Parents Are Talking About — Delivered Straight To Your Inbox