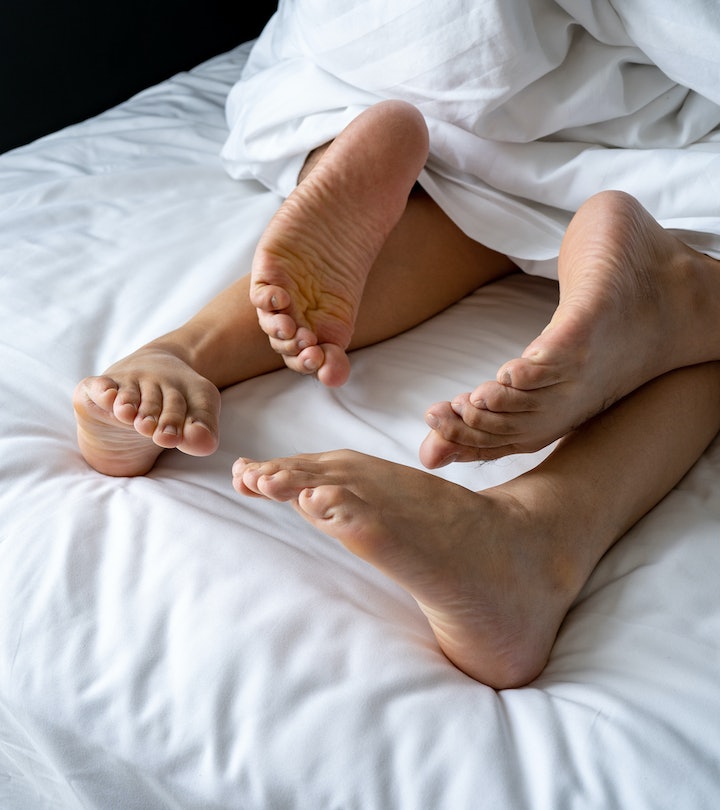 Here's Why You Bleed After Sex Sometimes

When you’re in the throes of passion, you might not be thinking about the fact that all of that bumping and grinding usually results in a lot of, well, liquid. So, when you look down at your sheets after sex and see semen, your own vaginal secretions, and possibly even some blood, it might be rather shocking — and frankly, a little scary. And it you might make you wonder why you sometimes bleed after sex. There are many reasons that a person might experience postcoital bleeding. Here’s what you need to know, and when you should check in with your OB-GYN.

What is postcoital bleeding?

You might expect to see some spotting before your period, but not necessarily when you’re intimate with another person. But, when you understand the function of your vagina, postcoital bleeding can make sense. “The uterus is a muscle built to expel things that are inside of it, specifically the uterine lining, and at other times, babies,” Dr. Greg J. Marchand, an OB-GYN and Accredited Master Surgeon, tells Romper. “So when mechanical energy is pushed into the uterus (the penis), blood from the inside can come out.” That this can be more common in women whose uteruses tilt backwards, Marchand points out, rather than forwards because that places the body of the uterus in the path of the penis.

Why do I bleed after sex?

You may experience blood loss for many reasons after a romantic rendezvous. Obviously, the first time your vagina might bleed after sex is, you know, because it’s your first time. “If you haven’t had sex before, then you may have an intact hymen,” Dr. Geoffrey Cly, an OB-GYN, tells Romper. “Since the hymen is made of very soft skin, during sexual intercourse it could be stretched and torn.”

You may also be more susceptible to bleeding if the walls of your vagina are dry or thin. That can result in small areas that can bleed because the friction from intercourse is rubbing those areas raw. Known as vaginal atrophy, this can be caused by a drop in hormone levels. “Fortunately, vaginal atrophy is completely reversible with medications, hormones, or other therapies and can be converted back into normal elastic pliable, healthy vaginal tissue,” says Cly.

You may experience bleeding after sex if you’re breastfeeding, too. “When you nurse, your estrogen level is lower and the vagina is dryer,” adds Cly. “Bleeding during the lactation stage can occur because of the friction due to the atrophic-like state of the vagina.” If you find that things are dry as a bone during breastfeeding, you can use some lubrication to prevent pain and reduce the rubbing, Marchand suggests.

If your period is due, that may cause postcoital bleeding. Because an orgasm is a series of uterine contractions, they can squeeze the inside of your vagina. So if you are about to have your period, orgasm can initiate it. “When that happens, some of the bleeding might be coming from your uterus instead of the vagina,” says Cly. The same thing can also occur when you’re about to ovulate, too. “Hormone changes can trigger and destabilize your uterine lining, so having an orgasm around ovulation might result in a slight amount of spotting,” he explains.

Of course, there are the more serious reasons you might be seeing red after sex. “Sometimes bleeding after sex could be due to vaginal dryness, cervicitis (inflammation or infection of the cervix), cervical ectropion, cervical polyps, uterine prolapse, lesions, or cervical cancer,” Dr. Jitsen Chang, an OB-GYN, explains to Romper. Although the likelihood that postcoital bleeding is a sign of cervical cancer is very low — researchers found that around 2% of women who bled after sex were diagnosed with cervical precancer or cancer — it’s still a good idea to speak with your doctor to rule it out.

Can you bleed if your partner is too big?

If your partner is well-endowed, his penis can stretch the skin of your vagina and cause some vaginal tearing. “Those are linear tears extending vertically up the vaginal wall,” says Cly. However, if your partner’s penis is large and long, it could cause a horizontal tear through the top of the vagina, which might be more dangerous. “It’s great to have vigorous, enjoyable sex,” he adds. “But try to listen to your body in case it becomes too intense.”

So what can you do to prevent potential postcoital bleeding? Even if your partner is big, you can have sex safely without bleeding, according to Grover. “If your partner is large, foreplay, more lubrication, or shallow sex positions are advised,” she says.

Can I bleed after rough sex?

A little rough and tumble (keyword rough) between the sheets might also cause bleeding. “Similar to the hymen, the skin of the vagina is very soft, like the inside of your mouth,” explains Cly. “So it’s more subject to tearing or scratches if there is vigorous friction during sex.” While that might not necessarily stop you from roughing it (literally), you should still be careful to make sure that pleasure doesn’t quickly turn to pain. “If you’re feeling extreme pleasure, you might not feel as much pain because the pleasure nerves are the most excited,” he says.

But, your body will give you a warning sign if things are getting too intense — if you hear a ‘pop’ and then realize that you’re bleeding, it’s most likely a sign that your vagina tore and ripped. Depending on how much you’re bleeding (and how much pain you might be in), you should speak to your gynecologist right away or head to the ER for an evaluation.

Can you bleed if you have an IUD?

Let’s say that you’re not planning to get pregnant right now and are using an intrauterine device (IUD) as your preferred method of birth control. Could it be that the tiny T-shaped device is the reason for your postcoital bleeding? Possibly, says Marchand. “It’s not common but, for whatever reason, if your IUD is not in perfect position, it could hold the uterus open slightly,” he says. “This could result in an area for blood to accumulate which could then be forced out when mechanical energy pushes against the uterine body.” If you find that you’re consistently bleeding after sex and you have an intrauterine device inserted, you might want to see your OB-GYN to ensure that the IUD is in the right place and hasn’t moved to the pelvic or abdominal cavity.

But if you’ve recently had an IUD insertion (and you’ve been having sex), you might notice some bleeding , and that is normal. “Generally, an IUD may cause some uterine bleeding for the first 3-6 months,” explains Grover. “But this can occur at any time and is not associated with postcoital intercourse after an IUD placement.”

Slight spotting or light bleeding once in a while after a night of nookie usually isn’t anything to worry about. But, if you experience consistent or heavy bleeding, you should speak to your OB-GYN about it to prevent any further complications.

Aydogdu, O., Pulat, H. (2012) Asymptomatic far-migration of an intrauterine device into the abdominal cavity: A rare entity. The National Library of Medicine, https://www.ncbi.nlm.nih.gov/pmc/articles/PMC3377742/

More Like This
6 Sex Positions To Reduce Leg Pain
What Does Amniotic Fluid Smell Like? A Nurse Explains
The Difference Between The PICU & The NICU
Can You Breastfeed After A Breast Lift? Experts Explain

This article was originally published on Oct. 4, 2019