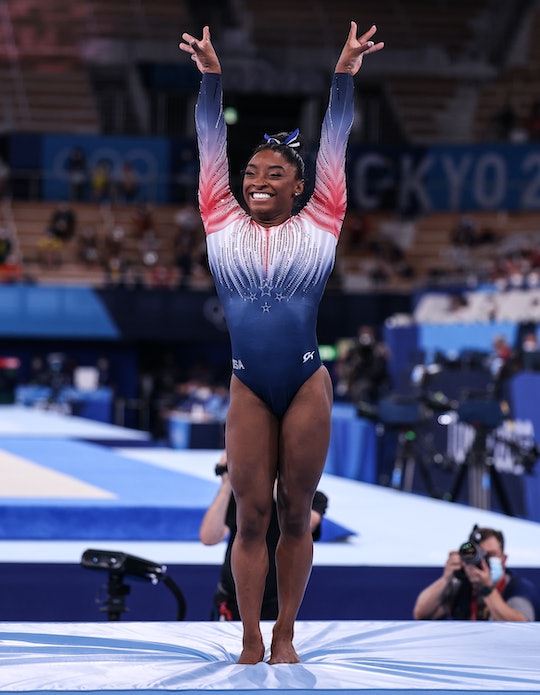 “I've gotten to talk to them which has been nice and reassuring.”

Simone Biles’ return to competing at the Tokyo Olympics was a triumphant one. The gymnast earned a bronze medal in the women’s balance beam event, her first individual medal after withdrawing from the rest of her scheduled events at the outset of the Games to protect her mental and physical health. It was a big deal for the young gymnast, returning to the balance beam, and Biles was quick to FaceTime her parents after winning the bronze medal.

Biles was seen by People sharing a little FaceTime moment after she had officially won bronze on the balance beam. “So it was my mom, my dad, my brother, my sister-in-law, my godparents, so they just wanted to say hi and stuff like that,” she explained during a press conference. This isn’t the first time Biles has FaceTimed her parents, Ron and Nellie Biles, during the Olympics, of course. “Usually at night, I'll FaceTime them or in the morning,” she said. “So almost every day I've gotten to talk to them which has been nice and reassuring.”

Simone Biles FaceTimed with her parents after winning bronze.

Going into the Tokyo Olympics, Ron and Nellie Biles were unable to join their daughter due to safety precautions, just like the rest of the Olympic athletes. Which was presumably especially difficult this time around for Simone as she withdrew from most of her events without her mom, who she has called her “rock” in the past, on hand to support her.

Fortunately, Biles’ decision to protect her physical and mental health has received support from all corners, even her fellow gymnasts who have spoken out about pressure of putting athletic performance before self care. As Biles was struggling with a condition known as the “twisties,” which put her at risk during complicated gymnastics routines, she was also secretly grieving behind the scenes. On Tuesday, she told reporters that her aunt on her father’s side died unexpectedly, coach Cecile Canqueteau-Landi told People. “That was another one, I was like, 'Oh my God. This week needs to be over,’” Landi recalled. “I asked her what do you need. And she said, ‘I just need some time.’ I said, ‘You call me, text me if you need anything I'll be here. Whatever that is.’ She called her parents. She said, ‘There's nothing I can do from over here. So I'm just going to finish my week and when I get home we'll deal with it.’”

The Biles family has clearly been through it this past week, between Simone’s withdrawal from most of the competition to the loss of a family member. Fortunately they were able to connect after her bronze medal win; it was a triumph for everyone involved. A well-deserved win.