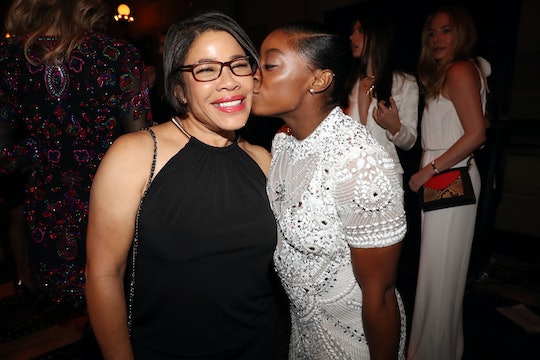 Simone Biles' Mom Nellie Is Always In The Olympian’s Corner

She adopted Simone when she was 6 years old.

With 30 Olympic and world championship medals to her name, Simone Biles has earned the title of being one of the greatest gymnasts of all time. The 24-year-old athlete is inspiring and has fans across the world. But her biggest fan? That would be Simone Biles’ mom Nellie, who the Olympian has described as a “rock” in her life. Nellie was unable to join her daughter at the 2020 Tokyo Olympics, something that was clearly a strain on both of them. She has been sitting in the bleachers, cheering on the Olympic gold medalist for years, and not being in Tokyo as a support to Simone was clearly on her mind when she flew off to the competition.

As Simone Biles arrived in Tokyo with an enormous amount of pressure on her, Nellie continued to support her daughter as best she could from afar. Trying to deal with that level of spotlight on the world stage is almost impossible to imagine, and 24-year-old Simone was doing her absolute best. But at least one person seemed to understand how the pressure might have been weighing on the young gymnast.

“Be The Best Simone”

Days before Simone shocked the world by withdrawing from the women’s gymnastics finals in Tokyo to prioritize her mental health, Nellie Biles shared a photo of her daughter on Instagram, alongside her husband.

“We held our breath but [knew] that prayers would prevail,” she captioned the photo. “Just be the Best Simone. We love you.” Her message was not to be the best, but to be the best Simone. Her best version of herself. That’s the kind of love a person needs from their mom.

“I Would Die For These Children”

Nellie Biles has said she would die for her children.

It took time for Nellie to really see herself as a mother to Simone and Adria, and she has been refreshingly open about trying to find that connection to the two little girls. In the Facebook documentary series Simone vs. Herself, Nellie bravely shared the moment when she first felt like their mom, “I remember praying for that bonding. Because telling them that you love them and you care for them; that’s all words. But then you wake up one day, and you realize that you would do anything for these children. And that you would die for these children. And when that feeling comes, that’s when you know you are truly a mother.”

Nellie Biles Was Born In Belize

Nellie Biles was born in Belize before moving to the United States in 1973. She would eventually move to Spring, Texas with her husband Ron Biles, who she met in San Antonio when he was in the Air Force and she was in college. Ron was a single dad to Shanon, who is Simone’s biological mother, and the couple welcomed two more children together, Ron Biles Jr. and Adam. When her two sons were off to college, Nellie was at a stage of her life when she thought she was finished raising children. But life had other plans.

Ron and Nellie Biles adopted Simone and her sister Adria when their birth mother, Ron’s daughter, was unable to care for them as little girls in 2003 when Simone was just 6 years old. “Growing up, my biological mom was suffering from drug and alcohol abuse and she was in and out of jail,” Biles shared during an episode of Dancing With The Stars in 2017. “I never had mom to run to. I do remember always being hungry and afraid. At 3 years old, I was placed in foster care.” The grandparents decided to step in despite the fact that they were already raising their own two teenage boys themselves.

Adjusting to having two new little girls in her life took time, and Nellie has been open about how therapy helped with that all-important transition to becoming a family of six. “The counseling was the best thing we did for our family,” Nellie told Grandparent Effect. “Simone always talked for Adria, always nurtured her and took care of her. Simone had to realize that she could be a kid. She had to relinquish the job of caring for Adria to me. She finally did when she began to feel safe.”

Nellie Has Worked As A Nurse

Nellie Biles is a great support for her family.

Nellie worked for years as a nurse before eventually co-owning 14 nursing homes throughout Texas. As of 2016, she told The New York Times she was working on creating a gymnastics business, which seems like a pretty good fit.

No matter what happens, Nellie Biles is in her daughter’s corner. For good.

This article was originally published on July 18, 2021