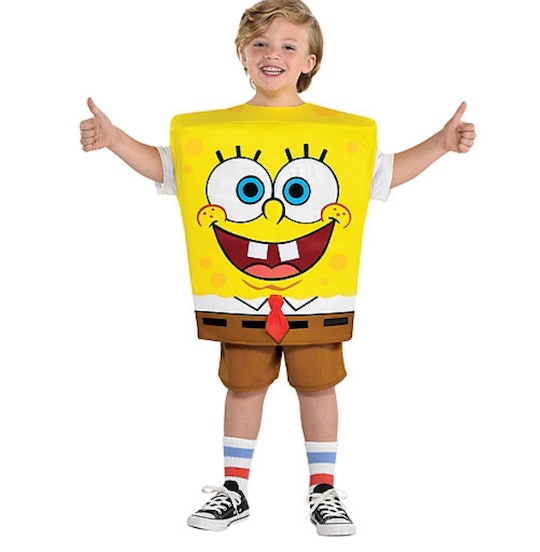 These costumes are cuter than a Krabby Patty.

Although you may not live in a pineapple under the sea, your family probably loves the little yellow sponge who does. That’s right, everyone’s favorite fry cook, SpongeBob SquarePants, has been a beloved cartoon character for over 20 years. Maybe it’s his infectious giggle, or his always-happy nature that keeps kids (and their parents) watching the show. But if you or your child wants to dress up as the sea sponge (or some of the other characters on the show), these SpongeBob Halloween costumes will be a big hit in Bikini Bottom... or just in your neighborhood.

SpongeBob SquarePants is one of the longest-running cartoons of all time. That’s right: the first episode aired way back on May 1, 1999, and it was the world’s introduction to a whole new underwater world of SpongeBob SquarePants, a sweet sponge who also works as a fry cook, Mr. Krabs, a miserly, money-obsessed crab, Patrick Star, a squishy pink starfish who just loves being SpongeBob’s BFF, Squidward Tentacles, a self-absorbed octopus (that’s right, Squidward is not a squid), and Plankton, a microbe with a master plan to take over the world by stealing the Krabby Patty secret formula. Apart from giving us an in-depth look at all these aquatically-acclimated characters, and funny jokes dispersed throughout each episode, a big part of SpongeBob SquarePants’ appeal is that, at its core, it’s about friendship and the overall likeability of its characters, despite their flaws.

So if you’re looking to dress up as the show’s leading character, Squidward, Sandy, or even Mr. Krabs, these Spongebob Halloween costumes that are cuter than a Krabby Patty.