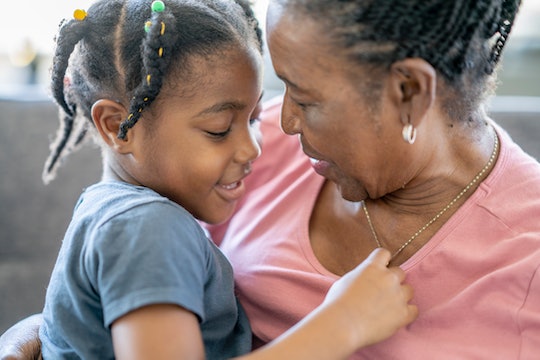 Everything You Need To Know About Grandparents Day 2021

Any excuse to make your Nana and Pops feel extra special.

They pick up your kids from school. They shower them with love and listen to their stories. They even remember how each grandchild prefers their PB&J (no crusts, extra jelly, etc). Grandparents truly are a gift in so many ways. So to show your appreciation to the ‘rents for everything that they do on the daily, you should know when National Grandparents Day is, so that you can set the day aside to celebrate them.

Here’s When Grandparents Day 2021 Is Celebrated

Unlike other holidays (think National Guacamole Day, for example), National Grandparents Day is an actual official national holiday, according to National Today. It falls on the first Sunday after Labor Day, which means that it never has a locked-in calendar date, because, well, neither does Labor Day. This year, Grandparents Day is on Sunday, September 12.

It was Marian McQuade, an advocate for elderly people, who was the impetus for Grandparents Day. McQuade, a mother of 15 (yes, 15 children), petitioned not just governors, but Congressional members and even presidents to designate a day that would honor grandparents everywhere, according to the L.A. Times. Eventually, National Grandparents Day was passed by Congress in 1978, and a year later, President Jimmy Carter signed it into law.

These Are Some Ways To Celebrate Grandparents Day

Sure, you could spring for a fancy meal and some presents for the grandparents, but sometimes, a handmade card and a meal around the table — and some non-bubble wrapped hugs, too — is even more meaningful. You can even have your kids interview their grandparents and ask them questions about their own childhood. You could have them craft something fun together, cook in the kitchen, or put on a talent show where Grandma and Grandpa are the guests of honor.

On National Grandparents Day (and every day), be sure to make your child’s grandparents and other important seniors in your lives feel special. It doesn’t have to be grandiose, because with grandparents, even the smallest gestures mean the most when they come from the heart.