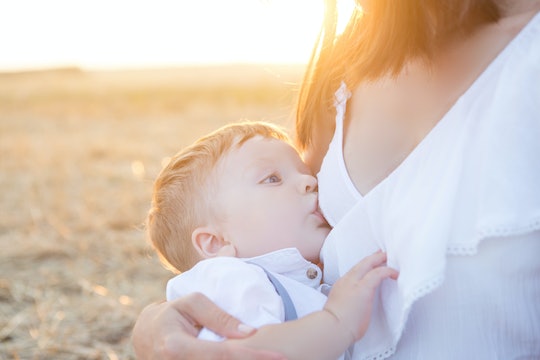 I've been nursing my now-toddler since he was born and, so far, have had a great experience. We got the early support we needed in order to establish our nursing relationship and, when we've gone out in public, the majority of people we've met have been very supportive (or at least have minded their own business). Still, we have also encountered our fair share of people who, either out of ignorance or a totally unfounded sense of familiarity, have blindsided us with some of the creepy things people say to moms who exclusively breastfeed their babies.

I just don't get it. Between our own experiences, and those of moms I've met through various breastfeeding support groups (or as I affectionately know them, my "breast friends"), I've been pretty amazed by the incredibly weird things people either think about breastfeeding or feel comfortable enough to say out loud. Most of these statements and questions are things that, if people just took an extra heartbeat or two to think before speaking would realize, are clearly either totally inappropriate, even in jest, or just flat out make so little sense that they shouldn't be uttered by anyone hoping to maintain even the slightest appearance of intelligence.

Fortunately, these people are very much in the minority, and most experiences of nursing in public are no more eventful than munching a sandwich by yourself. Unfortunately, people willing to say things like this really are out there and, sometimes, even in our own families. (Extended families and in-laws, amirite?) New mamas who want to nurse their babies in peace should keep an eye out, and think about memorizing a few clever comebacks just in case. After all, the only thing worse than having a weird encounter like the following, is thinking of the perfect response after you've already walked away.