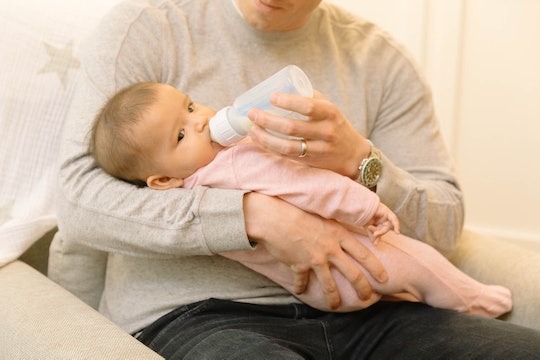 10 Moms Get Real About The Pain Of Formula-Feeding

There can be a lot of personal and societal baggage attached to how we feed our children. We're bombarded with messages from the media, our friends, and well-meaning relatives, all claiming "breast is best." As a result, moms can carry a tremendous amount of shame around having and/or choosing to feed their babies formula. I'm dedicated to ending that shame and believe that personal stories can help us do just that. In other words, when moms get real about the pain of formula-feeding, the impact that shame and stigma has on real, actual people becomes glaringly obvious, as does our need to collectively, as a society, end the stigma of formula-feeding entirely.

I went into my first pregnancy positive that I was going to exclusively breastfeed my child until he or she decided they had enough. I believed the common misconception that breastfeeding was the most valuable thing I could do for my child (even though I had given up my body in order to grow them and bring them into the world). But things didn't quite work out the way I'd imagined when my baby was born, due to neonatal trauma and undersupply. I was devastated. I felt like my body had betrayed me and, as a result of that betrayal, I had let my baby down in the worst way possible.

I spent months pumping so I could at least give my baby some breast milk after they refused the breast permanently at just 6 weeks old. The fact that I still had to supplement with formula left me drowning in such intense guilt. In fact, for the first couple months, I would only feed the baby expressed breast milk and my partner would take over for the second, formula-filled bottle. I just couldn't bring myself to feed my baby formula myself.

The worst part? I never fully forgave myself until last year. That shame no doubt impacted my relationship with my firstborn child, who turns 8 years old in September. It doesn't have to be this way. The truth is, dear reader, it shouldn't be this way. I know if I had listened to and connected with other people with similar stories, complete with education and forgiveness, I would have been OK much sooner.

These stories are my gift to my former self. I hope, as a result of these mothers speaking openly and honestly about formula-feeding, we can, together, pave the way for a more loving dialogue surrounding how we feed our babies. We must be kinder to ourselves, and each other.

More Like This
22 Instagram Captions For Pics Of Your Baby Trying Solid Food For The First Time
These Best Toys For 6-Month-Olds Will Do More Than Just Keep Them Occupied
The Best Apps For Selling Used Baby Gear
First Look: The New Jujube x Lilo & Stich Collaboration