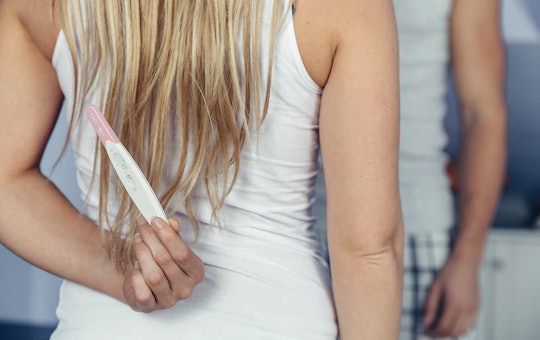 10 Reasons Why I Hid My Pregnancy

I'm typically a very upfront, "out there" person. However, the first time I discovered I was pregnant, I was immediately and uncharacteristically reluctant to say anything. This was about to be the biggest thing that ever happened to me; how would I even begin to tell people about something so momentous? I was concerned about so many things: how people would respond, what it might mean for my work, and whether the pregnancy would even stick. In the end, there were a lot of reasons why I hid my pregnancy, which is why even though I don't feel anyone should ever have to hide their pregnancies, I also completely understand why many women do.

Even though most people are genuinely excited and happy for pregnant women, that doesn't mean they don't also frequently respond to pregnancy in uncomfortable, unhelpful, and even discriminatory ways. I had no idea who in my life might fall into any or all of those camps, and I wasn't exactly in a rush to find out. If my pregnancy lasted, my belly would give me away eventually, and then I'd have no choice but to deal with that.

I was also really afraid for most of my first pregnancy, both for my security within the relatively new job I'd just begun, and the possibility of losing the pregnancy altogether. I didn't think I could bear to tell people about a pregnancy only to have to turn around and tell them about a pregnancy loss. (Which, ironically, is exactly what happened to me, though far later than I’d imagined when originally decided to keep quiet through at least my first trimester.)

What I learned from that experience, though, was that I am stronger than I thought. I also learned that not telling people about my pregnancy didn’t make it any easier to deal with the loss. It made it harder, because it meant I had less support. Actively trying to hide my pregnancy hadn't protected me in the way I'd hoped, and it did cost me some of my ability to enjoy my pregnancy, by forcing me to keep it from some of the people who might have shared in my (also hidden) excitement.

In my most recent pregnancy with my son, I announced a little bit into my second trimester. Having been through the grief of losing a wanted pregnancy before, I knew that I wanted at least some shot at enjoying myself (easier said than done), and a wider support base if that pregnancy ended as badly as the first. Fortunately, all went well. I’m not sure what I’ll do if there’s a next time — whether I’ll start telling folks right away, or waiting until I show, or what. Either way, I totally understand why some people don’t say anything, based on my experience with my first pregnancy and the reasons why I kept my excitement, to myself.

More Like This
20 Moms Reveal Their First Pregnancy Craving
All Your Questions About Getting Pregnant After A Tummy Tuck Answered
All The Reasons Why You Might Have A C-Section
A C-Section Actually Doesn't Take As Long As You Think, According To Experts