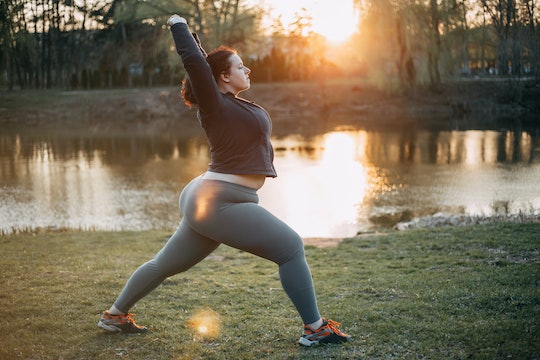 Women's bodies are often considered to be a subject of public discussion and scrutiny. Is she sexy enough? Skinny enough? Modest enough? Assertive enough? Demure enough? There's no winning. So you can imagine how much worse this gets when a woman is pregnant. And our society, in no uncertain terms, hates fat people. So you can imagine how it can feel to be fat and pregnant. There's so much we, as a culture, can do to make fat pregnant women feel less awful, including refusing to assume fat pregnant women have gestational diabetes.

I just missed being labeled with gestational diabetes during my first pregnancy, but was diagnosed relatively early on with my second. Let me tell you: it's a pain in the ass. Actually, to be more accurate, it's a pain in the fingertips you constantly have to prick in order to monitor your blood sugar. But people just looking at me couldn't tell I had gestational diabetes, just like you can't look at anyone and make a medical diagnosis strictly based on physical appearance.

It should be easy to see why these assumptions are not just garbage but harmful, yet people continue to make them every single day. So with that in mind, here's why you shouldn't assume someone is afflicted with this proverbial pain in the butt (but, again, actually fingers!) just because of their size:

More Like This
New Report Shows 80% Of Pregnancy-Related Deaths Are Preventable
What Does Amniotic Fluid Smell Like? A Nurse Explains
Here's How To Keep Your C-Section Incision Dry
What NICU Means & What To Expect From A NICU Stay