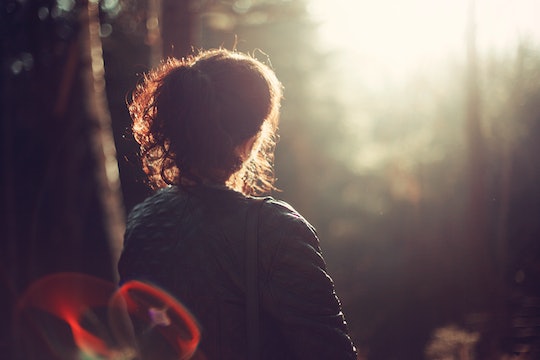 10 Signs You Actually Like Motherhood, You're Just Lonely AF

American society really likes the rugged individual, "go-it-alone" narrative in an attempt to describe how people should be, but humans aren't meant to spend significant amounts of time alone. We are social beings, and that need to be social — particularly with our peers — doesn't change when we have kids. If you haven't been diagnosed with postpartum depression, but you're feeling inexplicably sad, empty, or dissatisfied since becoming a mother, that's one of many signs you actually like motherhood, you're just lonely. Because we tend to live in isolated nuclear families instead of close-knit communities and extended family networks like people elsewhere in the world and in other time periods, becoming a parent can be an extraordinarily isolating experience.

There's no question that life with kids can be so rewarding and amazing. If that weren't true, none of us would choose to have them. However, relationships with kids tend not to be as mutually fulfilling as those with our peers, especially when our kids are very young, thanks to the huge disparity between what they can give you versus what they need from you. That's not a knock on kids at all; that's just the reality of the situation. They're young and dependent and they're not supposed to be our main source of human interaction (and parents aren't supposed to be kids' primary companions, either). Though that's common in our time and place, it's not the biological norm for adult humans to spend most or all of our time with just our own kids, without other adults for companionship and to help us care for them. However, because we know we're supposed to find motherhood so fulfilling, it can be confusing when we don't feel fulfilled by it. It's usually not because motherhood itself is the problem; it's because in our society, it's very easy for parents — especially mothers — to become socially isolated.

Some of the following signs may seem really obvious in print, but it's easy to get so absorbed in the day-to-day reality of keeping up with your child that you miss things that would have been obvious if you had the space to think about it. Having kids is an abrupt shift in a person's life, and once you figure out whatever routines you need to keep life moving with them, you may not realize that some of your adaptations have been really isolating until you're really used to them. But loneliness literally kills, so it's important for our mental and physical health to take care of our social lives. If the following signs apply to your life, then it's likely that motherhood is the right choice for you, you just need to break out of your social isolation.

More Like This
Dr. Jill Biden Just Delivered Some Frank, But Powerful, Advice On Motherhood
From Poses To Backgrounds, These Are The Best Back-To-School Picture Ideas
Signs Most Likely To Be Your Enemies, According To Your Zodiac Sign
12 Of Jack Black’s Best Parenting Quotes