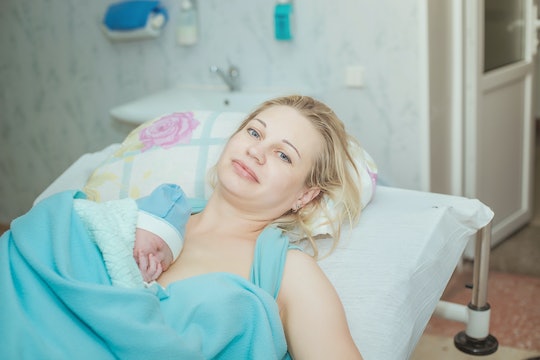 I Wasn't Prepared To Push My Kid Into The World

I have to be honest and admit: I'm not much of a planner. I mean, I try, and my ability to plan has definitely improved since becoming a mother. However, prior to my son entering the world, I wouldn't necessarily label myself a "ready-for-anything" kind of woman. So, it wasn't all that surprising that, when it came time to meet my son, there were things I wasn't prepared for when I started pushing. Crazy things. Painful things. Absolutely insane things that I cannot believe women are actually capable of doing. But I digress.

I had a very difficult pregnancy that I knew would end with a very difficult labor and delivery. I was initially pregnant with twins, but lost one in utero when I was 19 weeks pregnant. Directly after the doctor told me Twin A's heart was no longer beating, I was told I would have to birth a baby that would be alive, and a baby that wouldn't be. That demolished any preconceived notion I had of childbirth, so I had to go back to the proverbial drawing board. I changed my birth plan and accommodated for a larger possibility of complication, and was also just kinder to myself. I had already experienced so much pain, that if the pain of labor became too much, I knew I would allow myself the relief of an epidural.

So, epidural in place and after 20 hours of labor, I was ready to push. Then the "fun" really started. I wasn't prepared, to be sure, but that moment in my life — when I was literally bringing another human being into the world — is the scariest, most exhausting, insanely empowering moment I have ever experienced.