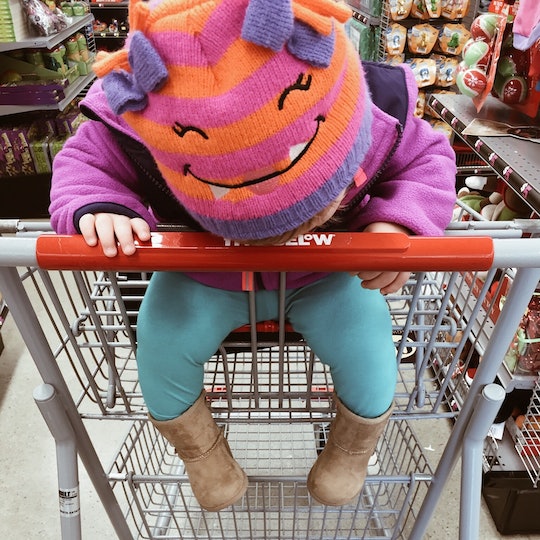 Sometimes simply existing as a mother, especially one who dares to go out in public, makes you vulnerable to an endless amount of shaming. Though I’ve been pretty lucky when it comes to mom-shaming, one incident in particular still sticks out in my mind, even though it’s been more than two years since it first occurred. Still, there are things I wish I said to the mom who stood up for me in the checkout line at my local craft store, because her gesture mattered more to me than I think she realized.

At the time my son was about 6 months old, and I was wearing him in a carrier while I shopped for a few things in preparation for the upcoming holiday season. It was late fall, but it was so cold outside it might as well have been the middle of winter. My son was fully dressed, and I took him straight from his car seat, secured him to my chest, and went quickly inside. In other words, I didn't really think much of the weather or how it was supposedly "hurting" my son. However, as I stood in line, an older lady observed dryly, “Where are his shoes?”

After first I didn’t even realize she was being judgmental. I thought she might have been actually concerned or unable to see that he was, in fact, wearing socks, as he often did as a 6 month old whose feet pretty much never touched the ground in a public space. So, I naively pointed out his socks, thinking that was the end of it. It wasn’t. She went on to lament about the cold, and to tell me repeatedly that he should have also been wearing shoes. I was so stunned I didn’t even know what to say. Who was this lady? How long had it been since she’d cared for a 6 month old and knew how useless shoes actually were (unless we were taking pictures because, hello, cuteness)?

Another woman, also a bit older, joined the conversation and defended me. She pleasantly noted that my son was fine, and that he was plenty warm seeing as I was wearing him and sharing body heat, among other things. The first lady stopped her lecture, and we all completed our transactions and went on our separate ways. I left feeling both stunned by the first woman's invasion, and grateful to the second woman's kind defense.

It’s very likely that these other women forgot this ever happened, but I haven’t. If I were to be in that situation again, here’s what I might consider saying to the woman who was kind enough to speak up: