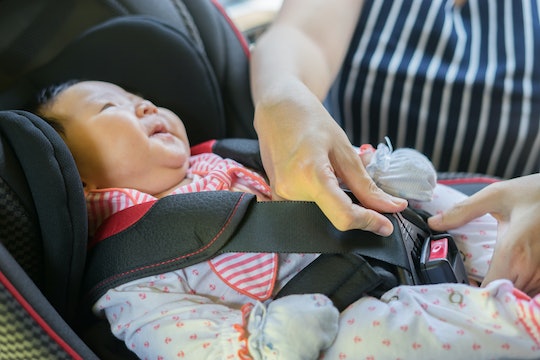 10 Things That Are *Much* Easier Than Installing A Car Seat

Fewer things pop my corn faster than annoying baby products. Doesn't matter if it's a musical swing stuck on an unpleasant note, a mobile that refuses to turn, or a damn toy that, no matter what you do, won't turn off. It doesn't have to be so hard, does it? And OMG the car seats. Those goddamn car seats. New parents, trust me when I say there are a boatload of things that are easier than installing a car seat. Like, for starters, literally everything. Because getting the car seat installed correctly is the actual worst. But, you know, safety first.

As new parents, my partner and I didn't know what the hell we were doing when it came to most things. I'm pretty sure it took a solid four hours to get the car seat up to safety standards. Even after I kinda, sorta figured things out, parts were loose or jostling and it never felt like my precious daughter was restrained properly. I mean, who decided I could not only have a child, but drive around with that child in those death traps known as cars!? This is madness, I tell you. Absolute madness.

You'd think we'd be more seasoned and educated in the parental department when my partner and I welcomed our son to the family, five years later. Nope. Same issues, except we were older, more exhausted, and less likely to put up with dumb sh*t like this. For as far as we've come as a society, can't we get a self-installing car seat already? Or at least one that doesn't require a complicated installment that always ends in tears, arguments, and a pint of ice cream. Here are some things that are way easier than installing that damn car seat, because at least we can laugh together, right?