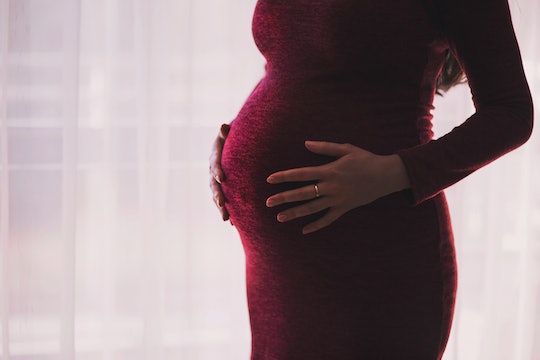 10 Thoughts Every Pregnant Woman Has When She's Carrying Low

I was warned my second pregnancy would be different than my first. Still, I never factored in that carrying lower could be one of the things that threw me for a metaphorical loop. While it’s not a bad thing, per se, it is different enough that I’m noticing and processing this change. In my experience, there’s a number of thoughts every pregnant woman has when she’s carrying low that are a direct result of her somewhat-surprising bump placement.

I mean, most women I know are at least somewhat familiar with what it feels like to have someone’s eyes drift downward while you’re talking to them. That’s, unfortunately, a reality of having breasts and the male gaze and living in a patriarchal society where what a woman looks like is more important than what a woman says. However, not everyone understands what it’s like to have an even more conspicuous bump even lower on your body. I’ve had a number of people shirk the old polite rule of never asking a woman about her pregnancy in the off-chance he's not pregnant, because there’s obviously no other explanation for what’s happening to me.

Yes, while a pregnant woman will probably have to deal with someone staring at her midsection while she's talking no matter how she’s carrying, for me it’s been a bit of a trip to experience the subtle and not-so-subtle differences of carrying low vs. carrying high. Here’s just a small sampling of what goes through my head on a typical day:

More Like This
A C-Section Actually Doesn't Take As Long As You Think, According To Experts
Stepmom Quotes & Sayings For Every Occasion
Are Movie Theaters Too Loud For Pregnant People? OB-GYNs Explain
Who's Getting Abortions? Mothers. 59% Of Abortion Patients Already Have A Child.