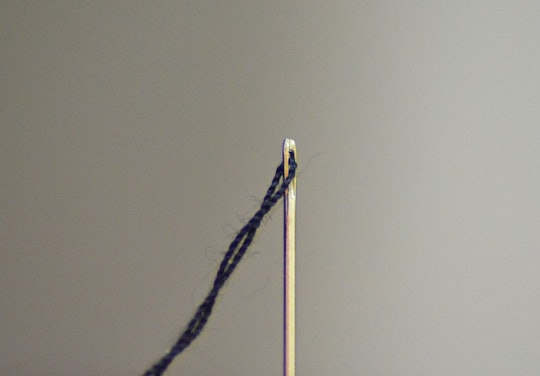 11 Responses To That Damn "Daddy Stitch" Joke, Because OMG Enough

It goes by many names, including but not limited to the "Daddy Stitch," the "Husband Stitch," or sometimes just the "Extra Stitch." It all refers to the same thing, though: a procedure after a birth that involves either an episiotomy or tearing, when the doctor sews a woman's vaginal opening to be smaller than it was before birth for the purpose of making sex more enjoyable for her male partner. It's mostly discussed as a joke... because it's so, so funny. Here are some responses to the daddy stitch joke that will, hopefully, stop it from ever being told again. Because blagh.

The daddy stitch is shrouded in mystery, and seems to be half urban legend and half something that actually goddamn happens because this world is a trash fire of epic, mind-numbingly painful proportions. Sometimes this "joke" involves a secret deal between a dad and a doctor who, apparently, is all too happy to oblige. Such a funny, funny joke. Ha. Ha. Other times the doctor just merrily "does everyone a favor" and obliquely hints about it after the fact. Again, so hysterical.

Hopefully you've never encountered anyone making this stupid and deeply problematic jest, but if you ever find yourself overhearing (or being asked), "So, after she was done pushing... did she get the daddy stitch?" Here are some ways you can respond:

More Like This
Can Dogs Sense Labor? 5 Signs Something Might Be Up
Mom Gives Birth To Record-Breaking 16-Pound Baby
Diastasis Recti Exercises You Can Do At Home To Heal Your Abdomen
100 Questions To Ask Your Partner At Every Relationship Stage
What Parents Are Talking About — Delivered Straight To Your Inbox