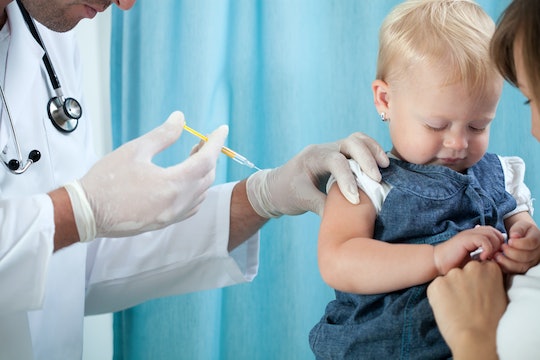 11 Sacrifices You Make When You Vaccinate Your Kids, That Are Totally Worth It

There were so many parenting decisions I wasn't sure I was going to make, before I became a mother. Was I going to have a drug-free delivery, or a medicated one? Was I going to co-sleep, or try sleep-training? Was I going to try attachment parenting? There were other decisions, however, that were a no-brainer, and vaccinating my kid was one of those decisions. Before my son was born, I knew he would get the shots he needed to protect him from horrible diseases. I didn't know, however, about the sacrifices you make when you vaccinate your kids; the kind of sacrifices that are totally worth it, but don't make this necessity all that easy.

I'll never forget that first round of shots, and having to hold my baby while someone stuck a needle in his chunky little thigh. I mean, that doesn't sound all that fun, does it? I remember him crying, and me soothing him as another shot was administered. I remember wanting to punch the freakin' nurse in the face, even though she was so kind and generous and understanding and doing exactly what I wanted and exactly what my son needed. I remember fighting back the urge to run and protect my kid from any and all pain, even though, by making sure he was vaccinated, that's exactly what I was doing. It's just an odd situation, causing your kid discomfort so that they can remain healthy, and it's one that can be tough on any parent.

I've never had a single doubt about vaccinating my son, no matter how hard it is to do (initially, because it does, eventually, get easier) and any other subsequent children I have will be vaccinated, too. More often than not, being a parent means making certain sacrifices that you know, in the long run, are worth it, and when you're vaccinating your kid that definitely includes the following: