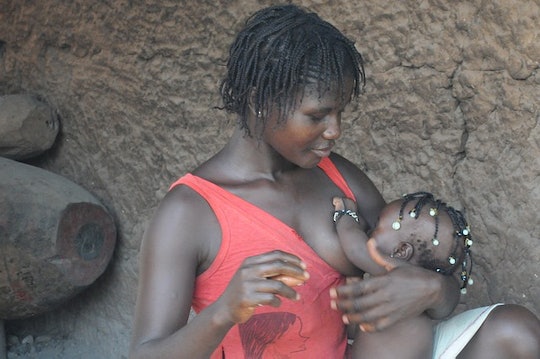 11 Things Every Breastfeeding Woman Needs To Hear From Her Partner

I think it's a pretty well-established fact that breastfeeding is exhausting and challenging, even at the best of times. Especially in the beginning, there are things every breastfeeding woman needs to hear from her partner to not only feel supported, but energized enough to keep going when things get tough. And, more often than not, things almost always seem to get tough at some point.

Thinking back to my early days breastfeeding my first child, I truly can't imagine getting through our challenges without the support of my husband. My daughter initially appeared to latch with surprising ease when we were in the hospital, but when I brought her home later that day, she was no longer able to latch. It took four weeks of various alternatives before she finally did latch on her own, and during that time we tried finger feeding, cup feeding, bottle feeding and nipple shields. The entire ordeal that was my breastfeeding experience, wasn't just physically exhausting, but emotionally exhausting as well.

In those moments, and many moments since, I have felt so lucky to have had the kind of supportive partner who was by my side in the middle of the night, helping me figure out finger feeding. My partner was there to dry my tears when I admitted that I was feeling like a failure, and he was there to tell me that he knew I was doing my best, and that everything would be okay. Every woman should be so lucky.

So, if you're either breastfeeding right this second or you're pregnant and considering breastfeeding, here are 11 things every breastfeeding woman needs to hear from her partner. While breastfeeding means that one person will be doing the majority of the feeding, it definitely doesn't mean that it isn't a team effort.

More Like This
75 “Would You Rather” Questions For Couples, Ranging From Sweet To Sexy
Why Is My Vagina Itchy? Experts Explain
Your Guide To Love Languages: Words Of Affirmation
Here's Why Your Vagina Burns After Sex
What Parents Are Talking About — Delivered Straight To Your Inbox