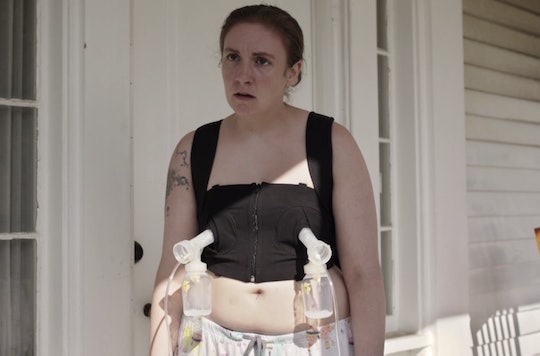 11 Things I'd Rather Experience Than Overwhelming Breastfeeding Guilt

When I was pregnant, I definitely thought I knew everything about how I'd birth and parent my baby. In fact, I really didn't understand how people had trouble having perfect births and being perfect parents. I obviously didn't bank on experiencing any kind of trouble, so I had no idea there was a list of things I'd rather experience than overwhelming breastfeeding guilt. I was going to rock every single part of motherhood, you guys. Guilt? What's that? Sure, it made sense that a lot of people f*cked this stuff up in generations past, but we have the internet! With the benefit of All The Knowledge quite literally at our fingertips, what was so hard about simply informing yourself on the relevant topics, outlining the pros and cons of all available options, deciding which choices were best for you and your family (duh, the good ones, obviously), and carrying those choices out armed with all the information and tools available to you? How were all people not having perfect births and babies and lives?

OK, clearly all of that is ignorant, privileged, and a little adorable. The senseless, random, unpredictable human imperfections that unavoidably occur in the process of carrying out even the most well-researched plans are what keeps all of us from having perfect anythings. And since having and raising babies is about as human as it gets, it's also about as imperfect and uncontrollable as it gets.

One of countless examples in my experience: breastfeeding. I thought I would do it for at least a year, maybe longer if it was really working for it. I just assumed I would magically produce more than enough milk for my baby, and probably extra that I would freeze to give him when we were ready to stop nursing and/or donate. (Because my maternal perfection would be so overwhelming I'd have a surplus of perfection to give to other, less-perfect moms. God, I was unbearable.)

It didn't occur to me that my meager breasts would continue to perform unremarkably, or that my baby would never really catch on to latching or that I would be plagued with low supply, mastitis, clogged ducts, thrush, and an abusive relationship with my breast pump for the duration of my breastfeeding career, which would last less than a year and would include supplemented formula after six months of pumping every two to three hours round the clock. Yeah, none of that seemed possible to me. And yet, all of it happened.

I mean, obviously it all ended up working out in my favor. If anyone needed to quickly learn to let go of a dogmatic adherence to parenting perfection, it was me. But before that lesson sank in — when I was trapped between my unforgiving expectations of my body and baby and the grueling reality that failed to live up to them — I was crushed with guilt. It came from other people for whom breastfeeding came so easily, and it came from myself, who had internalized the influences of a culture that says "good moms always breastfeed." It was not only a lot of work to get through those months, but it was a lot of work to divorce myself mentally and emotionally from the internal thoughts and external input that made me feel so profoundly sh*tty about something that was already so profoundly hard on a purely practical level.

Now that all of that is years back in the rearview mirror, there's almost nothing I wouldn't rather do than go through it again. No, I mean, it's honestly hard to think of something worse than having my head held under all that scalding guilt. Here are some really not-fun things that I would sincerely still rather do than ever experience breastfeeding guilt again: