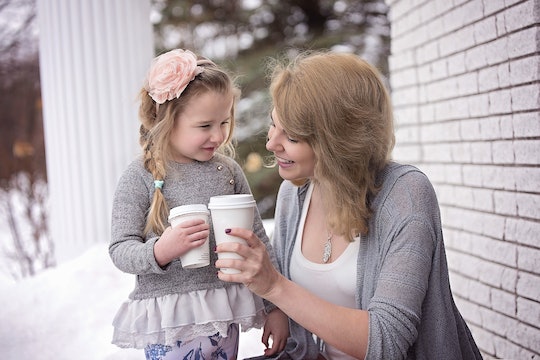 A few days ago, I had a stellar mom day. In addition to writing and entertaining my toddler, I also made fresh apple cider (from apples we'd picked ourselves) and used it to make apple cider donuts from scratch. I was really proud of myself, and eagerly awaited the opportunity to show off my tasty accomplishments to my bound-to-be-impressed-and-appreciative husband when he got home. Finally, that moment came. He bit into one, declared, "Oh. It's good," and kept going about his nightly business. I felt deflated, instantly reminded that sometimes, having it all together as a mom is totally overrated.

"It's good?" I was so pissed I could have dumped the rest of the cider over his head. After all that effort — not just making everything from scratch, but doing so on a work day, in between story time and playground antics and diaper changes and errands and everything else with a toddler in tow — that was all he could muster? "It's good?" I'm a freakin' miracle worker over here, I thought. In addition to crushing my normal daily Monday grind, I overcame a poorly-written recipe and everything to make some pretty damn tasty treats. Where TF is my parade?

Then I realized something: I had no one to blame for my hurt feelings but myself. My disappointment stemmed from my own decision to over-emphasize what he might think of it — something I couldn’t control, and that shouldn’t be a referendum on my success that day — instead of appreciating the experience and prioritizing what actually mattered: the opportunity to play with my son in the kitchen, and share my love of cooking, and to enjoy some tasty fall treats together. I'd been craving those donuts for weeks and I finally had them and they were really good. Did I really need some sort of "Best Wife And Mother" Award on top of that? Nope.

I ate the remainder of the donuts in the span of two days, and enjoyed every last bite. (Especially once I dipped them all in butter and extra cider, and rolled them in cinnamon sugar.)

The moral of my petty drama? Always look for your upside, Mama. As in, “What’s in this for me? What do I get out of expending this effort?” If the answer is “nothing, except the possibility of praise or imaginary bragging rights,” don’t even bother. Know your values and your priorities, and then do what really matters according to both. Do what makes you feel good in the moment, as well as stuff you’ll be proud of later. But never, ever hang your sense of accomplishment or fulfillment on outcomes that are beyond your control, including and especially other people’s reactions or gratitude. ‘Cause most of the time, when we think we're doing something by having it all together, ain’t nobody else paying attention.

Oh, and eat all the f*cking donuts. Times like the following may remind you that having your sh*t together as a mom is overrated, but satisfying a craving totally isn't.