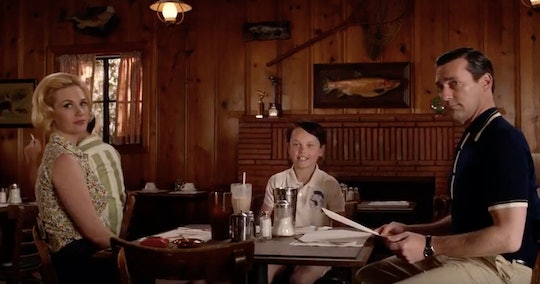 Of the many millennial parenting styles (and there seems to be a new one every day), nostalgia parenting is having its day in the sun. I'm not naive enough to think that every mom was June Cleaver in a fit-and-flare dress, and I definitely think we've got it right with current practices involving feeding our kids and keeping them safe. But if we were to lean more toward vintage child-rearing in other aspects, I don't think that would be such a bad thing. There are actually quite a few things that parents did in the '50s that millennial parents should consider bringing back, myself included.

Obviously I wasn't alive in the '50s, but my grandma was, and she raised three kids in that era. Gram was always more of an enlightened parent, and she was the only woman she knew who breastfed her babies. In other ways, however, she was a product of the times. For example, she didn't learn how to drive until 1965. Compared to my daughter's playdates, dance classes, and Spanish pre-school, my uncles and mom had a simple, yet joyful childhood. In a lot of ways, I think they were better off than the kids of today. And of course, it's worth mentioning that when I say '50s parents, I'm referring to white middle class parents. Truth be told, and according to a history that's rarely taught in schools, this particular time period was vastly different for people of color.

And I'm not saying that we should go back to spanking, smoking, blindly conforming to gender roles, and blaming moms for everything while simultaneously requiring them to shoulder the full burden of raising children, either. There are more than a few parenting philosophies I'm glad we've, as a culture, left behind. But that doesn't mean we can't learn from parents like my grandma. These common sense '50s parenting practices might be just what this generation of children needs:

More Like This
What Is RSV?
4 BIPOC Moms On The Beauty Traditions They’ll Never Pass Down
15 Weird-But-Genius Products For Breastfeeding Parents
Kids With Head Lice Don't Need To Miss School, AAP Stresses In Updated Guidelines