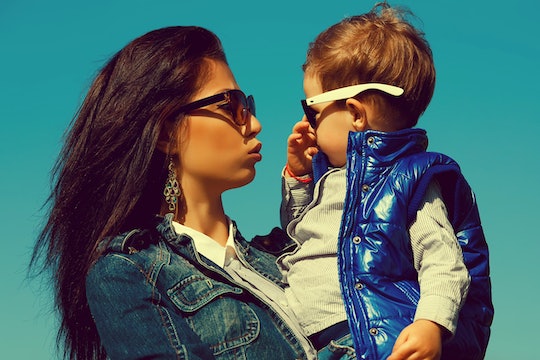 13 Motherhood Platitudes That Need To Die In A Fire

Motherhood is complicated. It's wonderful and hard and fulfilling and soul-crushing and inspiring and monotonous and very often it's all those things at once. It's difficult to capture it in words — I know, I do it for a living — but some people just profoundly miss the mark. Some motherhood platitudes need to die in a fire and (spoilers that should come as a shock to precisely no one) they're largely based on really sexist ideas of women and motherhood.

What inspired this meditation? A couple days ago on Twitter, user @jennyha_yes discovered some "inspirational" art. "This is some of the bleakest sh*t I have ever seen," she mused, and below that extremely accurate commentary was a picture of a lily in a frame with the quote: "Once you become a mother, you stop becoming the picture and start becoming the frame."

At first I thought it was a joke but, no, apparently this is a real quote that a real human thought was a real sweet thing to say. Fortunately, most of the responses I saw (rightly) read this nonsense as filth. But you know enough people thought this was somehow appropriate and not horrifying, so much so that at least one person put that quote in a frame (which feels weirdly meta)?

Make no mistake, this is a creepy AF thing to say, at least if you're trying to say it in a way that puts forth this idea as somehow inspiring. And guys, so much of "inspirational" motherhood is just like this. Let's take a look: