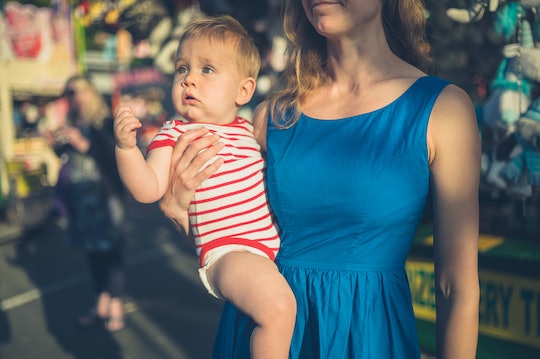 10 Creepy Things People Said To Me As A Single Mom

Being a single mom was pretty much the most difficult period of my life. Without a parenting partner, I had to do everything for my kids and be "on" all of the time. It was exhausting. Plus, I had to deal with the common, infuriating misconceptions about single moms, all of which only made me feel more alone. In fact, people seem to be so used to looking down on single moms that they'll pretty much say anything to them. The list of inappropriate, rude, and well, creepy things people said to me as a single mom is so long, you guys. So long, and so enraging.

The creepy comments pretty much fell into three categories: sexist assumptions about my character or my "failed relationship," comments about my kids, and gross pick-up lines. I had no idea how much stigma and discrimination I would face as a single parent. The end of my marriage happened so fast, that I honestly didn't have time to worry about what it would mean to be a single mom, or how others would perceive me now that I was raising my children on my own. So the first few times I was on the receiving end of some creepy comments, I was floored. You would think that people would view single moms as badass warrior goddesses, considering everything they do every damn day to make things work, but I realized that is not the case.

Then there was the double standard. The double standard that would attempt to eat away at my self-worth. You see, being a single dad is seen as this huge accomplishment or asset, but people assumed me being a single mom meant there was something wrong with me. I was asked why my husband left me, (spoiler: I was the one who left him), and was told I would never find a new man to want me because I was damaged and had kids (spoiler: I'm married now). At the same time, guys I met thought it was appropriate to offer to be my kids' new daddy, which was unbelievably creepy and gross.

Read on for some of the creepiest things I actually heard as a single parent. I shudder just thinking about them.