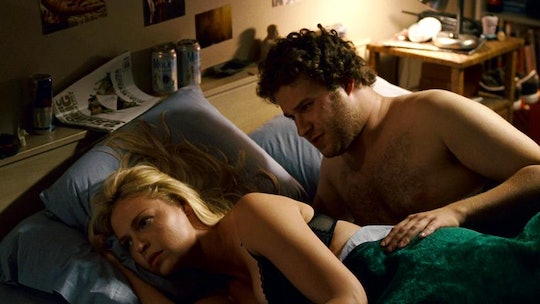 13 Myths About Pregnancy Sex That You Need To Stop Believing

Amy Schumer said it best in her HBO special last year — "You're made to feel really weird and disgusting if you're a girl who likes to have sex." And it's true. Add in the fact that you're a pregnant girl who likes to have sex and all of a sudden you're some kind of science experiment. The myths about pregnancy sex don't do much to aid women in this aspect, even though sex is what got you in that position in the first place.

Maybe no one's judging you, but you're freaking yourself out over pregnancy sex. Totally understandable. After all, there's someone else inhabiting your body, right? And you're a hostess with the mostess that definitely doesn't want to make anyone uncomfortable. Or yourself! God, pregnancy is already fraught with uncomfortable, painful moments. Surely sex can't make any of that better. And do I even have to mention that you're actually pregnant. That there's a whole list of things you can't do, like eating canned tuna fish or changing the cat litter, so might as well assume sex isn't OK either.

Deep breaths. And not the kind that push a baby out. If you're pregnant and you want to have sex, have it. You've probably heard a few of these 13 myths about pregnancy sex, but that's just what they are — myths. Pregnancy sex can be really fantastic, and the quicker you realize that and dispel these myths from your mind, the better you'll feel. (The orgasms will probably help, too.)