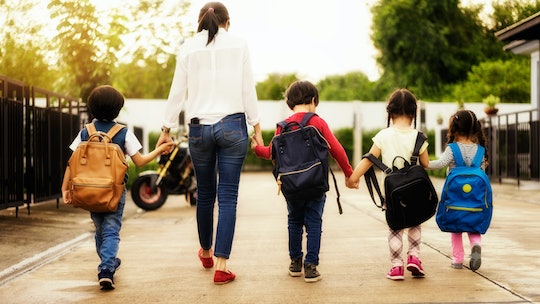 I've done a lot of difficult things as a parent, including but certainly not limited to: being pregnant and giving birth, enduring countless sleepless nights, changing poop-filled diapers, and learning how to handle emotional toddler tantrums. But the hardest thing I've probably ever done, so far, was send my oldest child to kindergarten. It almost broke me. I was worried, clueless, and, emotional about the fact that my baby was growing up. You better believe there are things every new kindergarten mom needs to hear, and, sadly, I feel like I didn't have the support network of other parents there to reassure me when I needed it the most. So as the new school year kicks into gear, I wanted to try to help other parents in a way I definitely would have appreciated.

First thing's first: everything turns out OK. This transition is just something your child — and you — have to go through. My second and youngest child recently enrolled in kindergarten and though that comes with its own set of Very Big Feelings, I felt like I was better prepared to handle everything. After all, I knew it was going to turn out OK, especially since I had the experience of sending one child to kindergarten already.

It's a lot, though, isn't it? It's a big step in and of itself, but it feels so symbolic, right? Up until now you've been their main "teacher." Certainly they've had others, like other parents, grandparents, cousins, daycare workers, nannies, and honorary aunts that have undoubtably saved your sanity a time or two. They may even have had a preschool teacher who helped pave the way for this very big First Day of school. But now their main teacher is their teacher. For seven hours a day, someone else is going to be molding them, influencing them, caring for them, watching over them, and introducing them to the world. That can be difficult to come to terms with, to be sure, but I promise you it's a good thing.

So with that in mind, and because we could all use a few kind words during those first few back-to-school days, here are some other things brand new kindergarten moms need to hear: