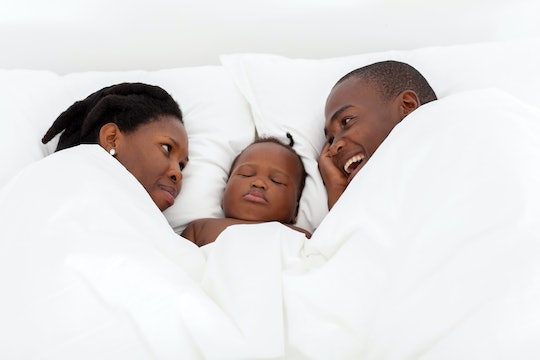 "Sleep When The Baby Sleeps" Is The Lyingest Lie

In my earliest postpartum days, there were more than a few moments when I felt like an actual unicorn. Why? Well, because I actually managed to sleep when the baby slept. This was after I stopped worrying something terrible would happen to him if I stopped looking at him for even a second, and before I needed to write during his naps in order to pay for expensive habits like eating multiple times a day. Because however well-intended folks are when they suggest to "sleep when the baby sleeps," that advice is basically impossible to follow, and is pretty much a giant lie to parents who inhabit the real world.

Babies can afford to sleep at random, weird times throughout the day and night because they don't have jobs, or other kids to raise, or other responsibilities that require them to not be conking out every couple of hours. Of course, the same typically can't be said for the parents subsidizing their random car-dozing and ring sling-napping. So aside from a few glorious weekend co-naps here or there, for most folks, "sleeping when the baby sleeps" tends to fall by the wayside, kinda like folding laundry as soon as it comes out of the dryer (or folding laundry ever, really).

Perhaps, someday and when unsolicited advice givers finally perfect the technology needed to, "sleep now while still you can!" during pregnancy, it will also become possible to regularly sleep when the baby sleeps. Until that joyous day, however, sleeping while the baby sleeps will remain the lyingest lie to ever lie. It's just not possible, especially at times like these:

More Like This
We Have To Talk About This Fish That Will Pat Your Baby's Butt Until They Fall Asleep
Cry-It-Out: The Popular Sleep Training Method, Explained
What Exactly Is The Ferber Method? The Sleep Training Approach, Explained
Baby Growth Spurts: When They Happen & What To Expect