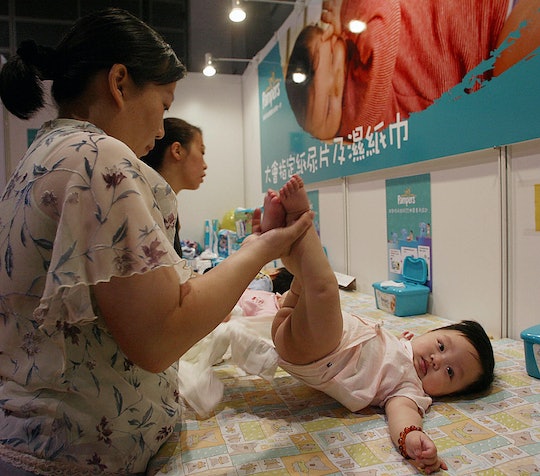 14 Things Your Baby Is Thinking During A Diaper Change

Does anyone else out give their baby an imaginary train of thought, especially when you're in the middle of an otherwise mundane task? Well, I do. My partner and I are constantly attributing dialogue to our son that he’s definitely not saying out loud. Is this fair? Mmm, that’s debatable. But is it entertaining? Yes, yes it is. Recently, I've been imagining what a baby thinks during a diaper change, and using my son's (probable?) internal dialogue to quell my curiosity.

You’d assume that, two years in, I’d be smoother at swapping out my kid's pee pants, but as he gets more mobile I get more clumsy. It’s probably a good his speaking skills reflect his age (two years old) because if he was better at articulating his thoughts, he’d surely put me in my place. I mean, he hasn’t figured out eye rolls yet, but he’s already given his dad a few masterful side eyes at my expense, which makes me both proud and afraid.

To be fair, all of this is speculation and I’m not trying to put words in my son’s mouth. I very much look forward to the day that he can articulate his own thoughts, so he can start owning his emotions and body and sense of self. But, until that day, I can only imagine how tired he is after years of diaper changes, and what that frustration must sound like in his head.

So, let's just imagine for a moment that we’re in our baby’s shoes, and take a dive in the rabbit hole of what is going through their mind during a change: