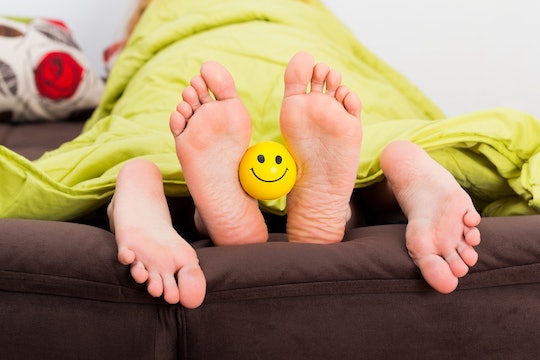 There's a lot to say when it comes to postpartum sex. On the one hand, it's probably been months since you've been able to have non-awkward, non-pregnant sex (those bumps are cute but they get in the way) and you're excited to get your groove back. On the other hand, no matter how you gave birth, your body has been through an ordeal and it's highly unlikely you're going to want to jump right back in the saddle as though nothing's changed. However, when you do decide your time has come, what does postpartum sex actually feel like? Turns out, it varies.

I don't mean to scare you guys, but I also don't want to lie. In general, from my experience and discussions (admittedly, largely with women in heterosexual relationships), one should proceed with the knowledge that depending on how you gave birth, what injuries you sustained, whether or not you're breastfeeding (which can cause vaginal dryness, particularly as your body is getting used to nursing); postpartum sex can be uncomfortable or even painful. It might take some dedicated and proactive communication with your partner and your doctor to set things right. The good news is, generally, it does get better and often goes pretty much back to normal. More good news? For lots of people, it never gets all that bad in the first place. If you have a newborn you're probably not having a ton of sex in the most problematic stages of vaginal healing anyway, so more often than not being preoccupied will help you ease into postpartum sex gradually.

Nothing about postpartum sex is a given or a requirement. Every couple needs to see what works for them and discuss how to resume and adjust their sex life. Having said that, I feel that a good way to figure out what might work for you (and what to expect) is to talk to other people who have been there. I chatted with other moms who let me know what to expect when you're expected to start boning again, and here's what they had to say: