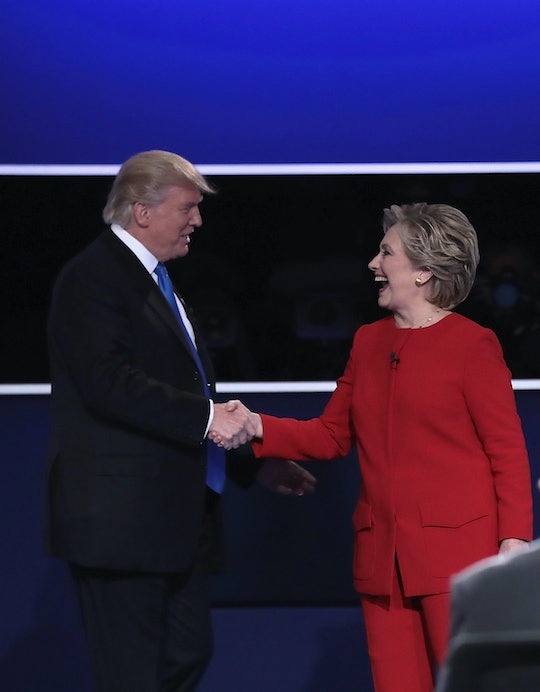 The first of three presidential debates has finished, but the conversation surrounding Hillary Clinton and Donald Trump finally sharing a stage are far from over. The Republican and Democratic nominees went head-to-head Monday night at Hofstra University in New York, and while it was pretty late for children to stay up and watch, make no mistake: parents definitely did. Of-age voters had the most to gain from watching to politicians argue hot-button issues, but it's worth noting what your kids would've seen in the first presidential debate if they'd watched, because, well, at this point it's basically like watching a parent take care of an upset toddler throwing a very public tantrum.

As a mom, I was quick to put my 2-year-old son to bed before settling in and watching what was sure to be a contentious discussion. Having watched Trump speak publicly for over a year now and conduct a very contentious campaign, I wasn't sure what I was going to see and, in turn, what my son would have seen had I let him stay up. So, off to bed he went. (Plus, the debate started past his bedtime and I'm not one to mess with that routine because I love sleep, thank you very much.) However, because this presidential election is so important — and because I'm acutely aware of how my son's future will be impacted, depending on the nominee who actually wins the presidency — I made a note to write down the very important lessons my son would've learned had he watched the debate with me.

I Watched A Candidate Lie

First and foremost, I watched what can happen when someone doesn't tell the truth, distorts a very real, very undeniable sense of reality, and loses their cool on a disturbingly regularly basis. For over 90 minutes, I watched Trump deny that he was a key proponent of the "birther" movement, that he didn't favor and support the Iraq War, and that he didn't deny global warming (to the point that Trump's staffers were deleting tweets in real time). While Clinton urged the fact-checkers to "kick it into high gear," I sat in awe as I watched someone running for president blatantly lie, and on such a national stage.

In that moment (one of many), I was thankful that my son was sleeping. I try so hard to teach him that lying isn't acceptable. How could I convince him that lying about pooping on the living room carpet is bad, when a man vying for the United States' presidency can lie about almost everything he's ever said?

I Watched A Candidate Blame The Internet

Your kid definitely missed Clinton talking about her 2-year-old granddaughter, who celebrated a birthday the very same day Clinton shared a stage with Trump. Clinton's opening remarks touched on her granddaughter's special day and the time she spends thinking about the future because, eventually, her granddaughter will be one of many who call that future their own. Trump, later on during the debate, talked about his young son, too. When speaking to the dangers of cyber warfare and the internet at large, Trump talked about Barron Trump's — his 10-year-old son — uncanny ability to use computers:

I have a son, he’s 10 years old, he’s so good with his computers, it’s unbelievable. The security aspect of cyber is very very tough, and it’s hardly doable, but I will say that we’re not doing the job we’re supposed to be doing.

I own a computer — and an iPad, a laptop, and even those outdated iPods — yet my son hasn't become so good with computers it's "unbelievable." Maybe it's a difference in parenting techniques. Maybe it's a difference in our children's age. Maybe it's simply that we're just different. Either way, I'm thankful my son missed out on how easy it is to use computers at just 10 years of age because, well, I don't want my kid getting any ideas.

I Watched A Candidate Fat Shame Another Person

Thankfully, if your kid was sleeping during the debate like my child was, they almost missed some horrific fat shaming. Trump claimed he has no idea who infamously hacked the DNC, saying, "It could have been Russia, or maybe China, or it could have been someone sitting on their bed that weighs 400 pounds,” because what's an unfounded argument without a little fat-shaming on the side, right? As I consistently attempt to create a body-positive environment, I'm glad my son slept through a presidential candidate fictitiously and erroneously blaming a fat person he doesn't know for something they probably (read: definitely) didn't do.

And I Watched A Candidate Look Perfectly Presidential

However, my son also missed someone staying cool, calm, and collected in the face of what can only be described as someone throwing a "fit." While Trump lost his cool, interrupted another human being on numerous occasions, tried to change the subject because he didn't have a plan, and just didn't make sense at all at times, Clinton took the high road. She smiled, asked people to look at the facts for themselves, and she held her own in the face of so much toxicity and misinformation. While so many women do this on a daily basis, so few men work enough to notice it. I'm sad, in a way, that my son missed such a blatant, obvious representation of what so many women do on a daily basis: endure loud, egocentric, and unqualified men in order to do their job.

Since this presidential election has been so contentious and so unprecedented, I'm sure my son, like your children dear reader, will hear about this presidential debate (and the others that will follow) eventually. Until then, however, I'm thankful my son can be blissfully unaware of the current political climate. I'll sit by myself, while he peacefully sleeps, knowing I have the luxury to protect him from moments such as these: when a tantrum is an acceptable reaction from a presidential candidate, and a highly qualified woman has to work twice as hard for a job she clearly deserves.