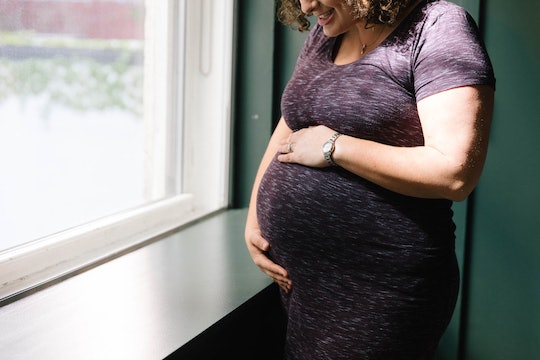 These Rumors About Increasing Your Chances Of Conceiving Are Totally Bogus

If you are trying to conceive, then you probably know there is a best time to get pregnant (hint: when you are ovulating), and you've read all about basal body temperature, cervical mucus, and ovulation prediction kits. But you've also probably stumbled upon some advice that isn't exactly backed by science, but oodles of women saying, "It worked for me!" And the truth is, when you are TTC, you will try almost anything to ensure your success. Well, I say we boost your odds by weeding through five myths about increasing your chances of getting pregnant that are not true.

First up: Rumors that position matters when trying to conceive. Not true, says Dr. Sheeva Talebian, director of third party reproduction at Colorado Center for Reproductive Medicine in New York. "Missionary, all fours, it doesn’t really matter," she says. "What is most important when trying to conceive is that you have intercourse around the time of ovulation. The day proceeding and the day of ovulation are your most fertile days."

Talebian says this is due to the consistency of your cervical mucus during this timeframe, as well as the viability of the egg (typically if it does not fertilize within 24 hours of ovulating, it is no longer viable).

Also bogus? The idea that lying on your back with your legs in the air after intercourse can increase your chances of getting pregnant, Talebian says.

"Cervical mucus at the time of ovulation is designed to trap sperm, acting like a sponge," she tells Romper in an email interview. "The majority of fluid in ejaculate is extraneous. Yes, some of the excess fluid that 'leaks' out has sperm in it. But thousands upon thousands of sperm are still in the vaginal canal and even swimming up into the uterus within minutes of intercourse."

According to Today's Parent, another common misconception is that having sex every day will help increase your chances of getting pregnant. The truth is, sex that feels like a chore — even when it's for the purposes of conceiving — can make you feel more pressure about the situation than you already do. Dr. Paul Claman noted in the Today's Parent article that you should simply "make the most of your fertile window," having sex every two to three days starting 18 days before your next period.

And when you are doing the deed, Talebian says it's not necessary to have an orgasm like many people think.

"It is true that the uterine contractions associated with an orgasm can help sperm swim up and out into the fallopian tubes where they will hopefully meet an egg," she says. "However, if your guy has normal sperm parameters and normal sperm function, plenty of sperm will still find their way up into the tubes without an orgasm."

Also not necessary? Nixing all alcohol and caffeine in order to get pregnant, and going full throttle on your exercise routine, Talebian says. I know — but can we marry her for saying that?

"In fact, lifestyle choices that lower your stress level will be helpful to your mental fortitude when trying to conceive," she says. "Excess alcohol and caffeine (defined as less than two beverages a day) may be detrimental to your fertility (although data is limited to support this). Excess exercise resulting in progressive weight loss and eventually a lack of ovulation is also detrimental to your fertility."

Talebian adds: "A daily morning cup of coffee, evening glass of wine, and a daily workout will not lower your chances of conception."

And is that not the happiest true thing you've heard all day?

More Like This
Here’s How To Combat Performance Anxiety When Trying To Conceive
What Is RSV?
20 Toys You Don’t Want To Miss From Amazon’s Top Toys List Of 2022
When Is Thanksgiving? All About Turkey Day 2022