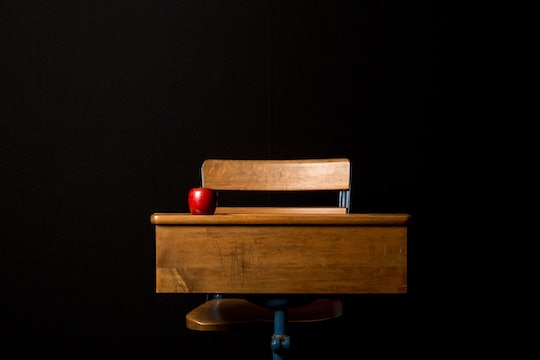 One of the main reasons parents, teachers, and administrators so vehemently opposed the confirmation of Donald Trump mega donor Betsy DeVos as secretary of education was her demonstrated dedication to "school choice." While it sounds on its face like a nice concept — who doesn't want to have options? — its possible actual implementation promises pull money from public schools and could denigrate the education students who attend them receive. Now, a bill introduced this year illustrates exactly what this might look like in practice — and, as a result, Americans must now fully consider the ways H.R. 610 could hurt public schools.

Republican Rep. Steve King of Iowa introduced the Choice in Education Act of 2017 in January without it making much of an impact on the news cycle. In fact, King himself dominated many more headlines earlier this week when he tweeted a racist sentiment that was praised by white supremacists like former Ku Klux Klan leader David Duke.

And the tweet, which seems to promote the notion of a white ethnostate by insisting that "we can't restore our civilization with somebody else's babies," actually does a good job demonstrating how concerned he is with ensuring the well-being of all of America's children. That is, not much, as H.R. 610 would repeal the Elementary and Secondary Education Act of 1965, which is kind of a big deal considering that's the law that guarantees "equal opportunity for all students."

But, piece by piece, King and others who support the bill seem to want to dismantle that very idea. Here's how H.R. 610 would negatively affect public schools.

A Brutal Redistribution Of Funds

If H.R. were to become law, a voucher program that critics say would divert much-needed federal funding from public schools would be enacted. Under this system, educational agencies would have to allocate funds that currently contribute to maintaining public education to families who would rather send their kids to private institutions or even homeschool their kids. Those in favor of this "voucher" system believe that it would actually result in decreased costs to taxpayers and endorse higher quality education.

But superintendent of the South Bay Union School District in California, Katie McNamara, told The San Diego Union-Tribune that the loss of this funding would be devastating for her district:

The loss of federal funding would be catastrophic to school districts including South Bay Union ... Very basic foundational programs and services would be reduced or eliminated.

It's true that the text of the proposed bill does not directly address the issue of individualized education plans, or IEPs, which are tailored by school faculty and parents to a students' specific needs. But in the case that vouchers redirect money that would normally go to those efforts, the resources to ensure the quality of the IEPs, and the ways they are enacted, would only decrease.

This is especially detrimental for kids with special needs because, for them, accepting a voucher to attend a private school means forfeiting the protections of the Individuals with Disabilities Education Act. That means that they no longer have the right to their IEP at a private institution, creating an impossible bind.

Although former first lady Michelle Obama dedicated some of her time in the White House to endorsing healthy habits among America's schoolchildren, King and others who support H.R. 610 hope to reverse that, too. Namely, it would repeal key parts of the Healthy, Hunger-Free Kids Act of 2010, which basically mandates that most schools provide more nutrient-dense meals with more whole grains and veggies and go much easier on the trans fats and sodium. But the "No Hungry Kids Act" that's part of H.R. 610 would actually abolish the nutritional requirements that rule cafeterias across the United States.

Big Changes For The Department Of Education

Republicans generally advocate for small government, and, if the Choice in Education Act passes, its implementation would advance that goal in a big way. Namely, it would limit the function of the federal Department of Education to, essentially, administering block grants to qualified states. Now, the department is dedicated to keeping schools discrimination-free and enforcing other education laws, as well as manages federal student aid, and more, according to Business Insider. It's demolition would mean changes in public schools on a scale that's hardly imaginable.

Taken together, the effects of H.R. 610 would mean that public schools would be underfunded, and the children who attend them would get subpar nutrition from their school lunches. It would mean a constant struggle for these institutions, which by law must educate the kids with disabilities that private schools who would get voucher money are permitted to turn away.

It creates a lopsided system that would be detrimental for the most vulnerable among us: children. So, speak out against the bill for their sake if you believe there's a more equitable way to prepare them for their futures.