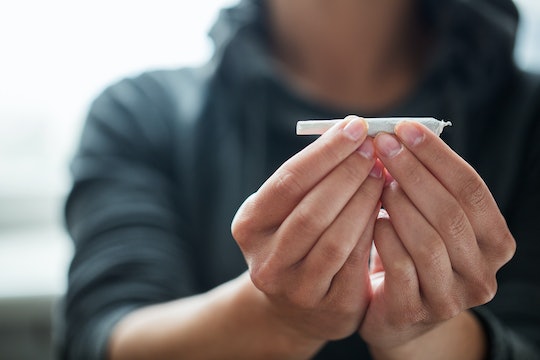 During the 2016 election cycle, a number of states finally gained access to recreational cannabis. Others, at the very least, legalized medical marijuana use. But despite the medical benefits, limited side-effects, and its widespread popularity, cannabis continues to be taboo. It’s even more taboo when you have children. While “wine culture” is perfectly acceptable in mom circles, it’s much harder to talk about cannabis use. It’s even more complicated when you’re raising children in a world with plenty of conflicting information (and disinformation). So how exactly do moms come of the “cannabis closet” to their kids?

According to a 2017 study, 52 percent of Americans over 18 have tried marijuana at some point in their lives. The poll also found, according to NBC News, that out of the respondents who have tried pot at some point, 65 percent are parents. In fact, the same study found that "people who are current marijuana users are slightly more likely to be parents, at 51 percent." So for many moms, it starts by never making cannabis "taboo" in the first place. Openly discussing your use, and its benefits, is one way to get a leg up on the people who would label you "irresponsible" for using. Others might not start using cannabis until their kids are older, though, so it can sometimes be a bit more challenging. And the conversation is further complicated if you live in a state where it hasn’t been fully legalized. I currently live in Colorado, which was the first state to legalize recreational marijuana use. I know the law will make it much easier for me to disclose my use to my son as he gets progressively older.

Still, when you're preparing to discuss cannabis use with your kid(s), you'll want to have an idea of what to say to such curious young minds. That's why I asked a few other moms how they went about disclosing their cannabis use to their kids. Feel free to use their answers as a guideline for when and/or if you decide to sit down with your own kids to have “the talk” (or, frankly, many talks... preferably accompanied by donuts).