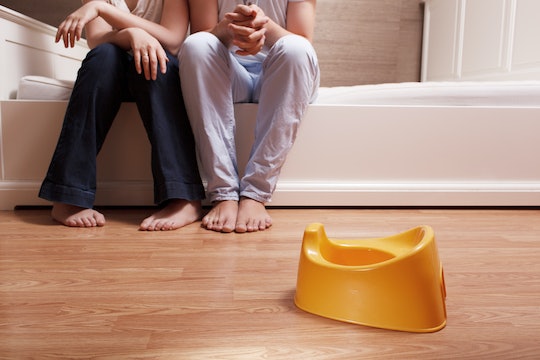 6 Responses To The Question, "Is Your Kid Potty Trained Yet?'

My daughter was fully potty trained by the time she was 2. My son, however, took a lot longer. He's 4 and stopped wearing a diaper at night, eh, about a month ago. I had heard that boys went diaper-free much later than girls, but I never really believed it so the delay was a shock. And when I was asked, "Is your kid potty trained yet?" I was force to realize how misguided that question truly is. I mean, who cares at what age your child finally went diaper-free? Most children learn to use the toilet properly before elementary school, right? What's the harm in letting the kids figure it out on their own?

At 18 months I decided it was time to potty train my daughter. Many people told me I was already late to the game and they just "couldn't believe my 18-month-old was still walking around in a diaper." But after multiple accidents on the carpet, including one where I had to scrub poop off the fibers, I decided nothing was worth that much trouble. Around 22 months, my daughter decided she will no longer use a diaper, and we began stress-free diaper weaning. In two months, she was living completely diaper-free, even at night.

Since I tend to learn from my mistakes, I didn't bother trying with my son until he was at least 2. But he showed absolutely no interest and I gave up trying pretty quickly. When he was closer to 3 he said he no longer wanted to wear a diaper and, instead, wanted to be a "big boy" like his father. But he refused to wear a diaper at night and, after multiple nighttime accidents, it was all too much for this working mother to handle. Our struggle continued for almost a year. So trust me when I say the last thing I needed was someone asking me why we hadn't mastered potty training yet. So if someone feels like inquiring about your kid's potty prowess, here are a few things you can say in response: